Today in this post we will discuss about the King Harshavardhana’s (Raja Harsha) biography (his parents’ and siblings’ names), his achievements, the story of war between Harshavardhana Vs Pulakeshin II and his connection with Buddhism and Buddhist councils organised by him.

Harshavardhana was the greatest ruler of the Vardhana empire. He came to power in 606 CE. Prabhakara Vardhana and Yashomati were his parents. He had an elder brother namely Rajavardhana and an younger sister named Rajashri. He was also called “Shiladitya“. Thaneshwar was his capital.

Yashomati, her mother, pained by the death of her husband, committed in Sati in 605 CE. Devagupta of Malwa killed Rajashri’s husband Gruhavarma and imprisoned her at Kannauj. Raja Vardhana who went to get her released was killed by Shashanka of Gaudadesha. Harshavardhana came to power under such painful circumstances. The release of Rajashri and revenge on Shashanka were his main aims.

Rajashri escaped from prison and went towards Vindhya mountains. Harshavardhana who came to know of this, searched her with great difficulty and prevented her from jumping into the pyre. Then he added Kannauj to his empire and made it his second capital.

Harshavardhana, with the help of Bhaskara Varma of Kamarupa attacked Shashanka of Gaudadesha/Gauda Kindgom (Bengal) and took revenge. But as long as Shashanka was alive, he could not defeat him completely. Then he defeated Devagupta of Malwa and annexed it to his kingdom. By 612 CE, he achieved complete control over Pancha Sindhus of Punjab. Kannauj, Bihar, Orissa and other places were added to his kingdom. He defeated Dhruvasena II of Vallabhi. Later he gave his daughter in marriage to him and established a good relationship with him.

After the demise of Shashanka of Gaudadesha, Harshavardhana won Orissa, Magadha, Vodra, Kongonda (Ganjam) and Bengal (Gaudadesha). Later he defeated the ruler of Nepal and received tributes from  him. He established his supremacy by defeating North-Indian Kingdoms. In commemoration of these achievements he took the title “Uttarapatheswara“.

Harshavardhana tried to extend his empire in the South beyond the river Narmada. The battle of Narmada took place between Harshavardhana and Pulakeshin II in 634 CE. He was defeated in this battle. Pulakeshin, who won, took the title “Parameshwara“. Aihole inscriptions says that Harsha’s Harsha (joy) flew away seeing his war elephants falling in the battle field. Hiuen Tsang also mentions about Harsha’s defeat. Narmada river became the border between these two empires.

Harshavardhana called himself the king of Magadha in 641 CE. His fame spread in foreign countries as well. He exchanged ambassadors with China. The credit for uniting North India after the Guptas goes to Harshavardhana. His empire extended from Punjab in the West to Bengal and Orissa in the East and Himalayas in the North to Narmada river in the South. Here is the map of his empire given below : – 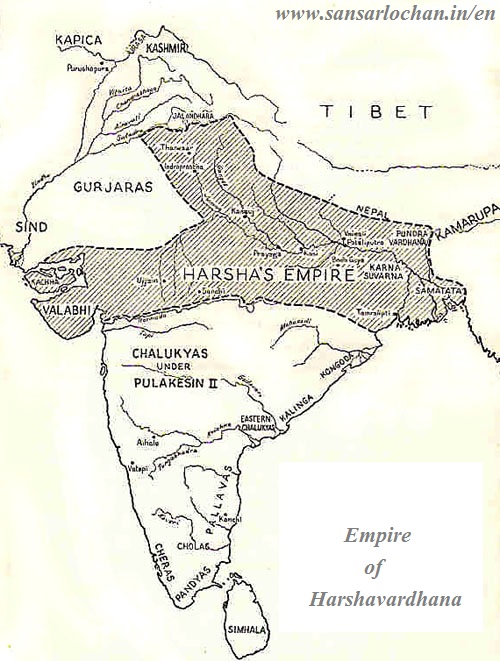 Harshavardhana, a devotee of Lord Shiva later embraced Buddhism. He prevented animal sacrifices in the empire and prohibited the practice of non vegetarian food. He built stupas in the prominent places of Buddhism. The opponents of Buddhism and characterless people were punished by him. He brought the remains of Buddha’s teeth from the king of Kashmir and keeping it inside built a stupa over it at Kannauj.

Harshavardhana organised a conference known as Maha Moksha Parishad at Prayag which comes once in five years. Hiuen Tsang was invited to this council. The council went on for 75 days. He gave donations to poor people of all religions. In this council the procession of Buddha’s idol along with that of Shiva and Surya were taken.

Among the Vardhanas of Thaneshwar, Harshavardhana occupies a high position. He is one of the achievers of Ancient India. He was an able administrator, a brave soldier, a patron of literature and cared for the welfare of the people. He himself was a scholar. He wrote dramas “Ratnavali”, “Priyadarshika” and “Nagananda” in Sanskrit. He patronized famous poet Banabhatta who wrote an invaluable work called “Harshacharita” about Harshavardhana. A patron of learning, he gave lot of donations to the Nalanda University.

2 Comments on “Harshavardhana – His life, Achievements and Connection with Buddhism”