The death of Aurangzeb in 1707 marked the beginning of the end of the Mughal Empire. Of course, the Mughal emperors reigned till 1857 but only in name. The successors of Aurangzeb, called the Later Mughals, lost hold over the Empire and independent kingdoms grew up in every part of India. Most of the Later Mughal emperors remained puppets in the hands to their powerful nobles or pensioners of the Marathas and, later on, of the British. The last Mughal ruler, Bahadur Shaah II, was deposed by the British after the revolt of 1857 and deported to Rangoon to die their as a prisoner. Various factors contributed to the downfall and extinction of the Mughal Empire. 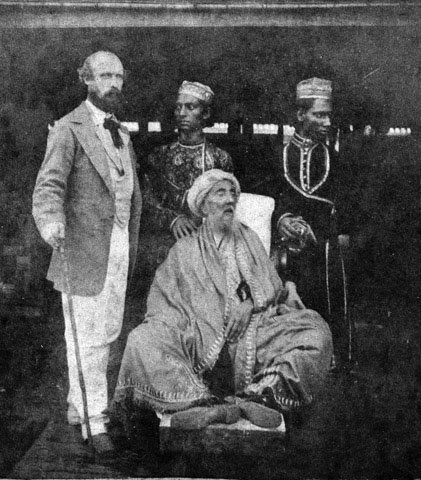 Causes of Downfall of the Mughal Empire

The Nature and Policies of Aurangzeb

Aurangzeb was partially responsible for the downfall of the Mughal Empire. The suspicious nature of Aurangzeb which did not permit either any of his sons or nobles to become capable; his religious bigotry which lost him the loyalty of the majority of his subjects and resulted in the revolts of the Jats, the Satnamis and the Sikhs; the Rajput policy which resulted in fighting against the states of Mewar and Marwar; and, his Deccan policy which resulted in a long-drawn struggle against the Marathas brought misfortune to the Mughal Empire. His policies sapped the economic and military resources of the Empire and the entire administration broke down.

The Incapability of the Later Mughals

The successors of Aurangzeb proved incapable and degenerate. That sealed the fate of the Empire. After Aurangzeb, no Mughal emperor rightly deserved to be an emperor. Most of them were addicted to wine and women. Therefore, all proved worthless rulers. No Empire could exist under the rule of such rulers. It is rather surprising how the fragment of the Empire continued till 1857.

The Corruption of the Nobility

The Mughal nobility followed in the footsteps of their licentious emperors. There was total absence of capable nobles during the rule of the Later Mughals. Most of the nobles were incapable and if anyone of them was capable, he was not loyal to the Empire and carved out independent kingdom for himself. That led to the break-up and degeneration of the Empire.

The organisation of the Mughal army along feudal lines, the practice of taking wives, concubines and slave-girls on the battle –field and the failure of the Emperors to improve armaments and fighting tactics weakened and demoralized the Mughal army. It no more remained an effective fighting force. Aurangzeb suffered on these counts when he fought against the Marathas. During the rule of the later Mughals, the conditions became worst. No Empire could exist in absence of military strength.

The Wars of Succession

Group Rivalry at the Court

The weakness of the Later Mughals led to treachery, treason and group politics at the Mughal court. The nobles divided themselves particularly in two rival groups viz. one group consisting of foreign Muslims and the other that of Indian Muslims. Each of these groups tried to capture the power of the state for itself and, having failed to settle the affair among themselves, sought help from other powers. The Indian Muslims took the help of the Marathas while the foreign Muslims sought the help of Ahmad Shah Abdali, the ruler of Afghanistan. It resulted in repeated invasions of the Marathas and Ahmad Shah Abdali on Delhi which led to the destruction of Imperial power and dignity.

The Attacks of the Marathas in the North

Peshwa Baji Rao pursued the policy of conquering territories in the North. Gradually, the Marathas occupied large territories in the North and became the strongest power in India. But the Marathas did not replace Mughals and did not assume the responsibility of an Imperial power. Their activities remained limited either to plundering or increasing their sphere of influence. That certainly affected adversely the fortunes of the Mughal Empire.

When Mughal Empire had already weakened because of internal decay, it had to face the attach of Nadir Shah and repeated invasions of Ahmad Shah Abdali. These attacks drained the Mughal Empire of its wealth and gave a final blow to the military power of the Mughals.

The absence of the spirit of political nationalism among the people

Dr. Bipan Chandra has contended that the absence of political nationalism among the people was an important socio-political cause of the downfall of the Mughal Empire. The Indians did not have the ideal of living and dying for the nation. Therefore, no group or class of people in the country was interested in maintaining the unity of the country and the Empire. Of course, the spirit of nationalism did not exist in Europe as well at that time but the European states like France, Spain and England had grown up into strong unified states and their people certainly linked their aspirations with their country, they were loyal to persons, tribes, castes, regions, religious sects etc. This fissiparous tendency certainly helped in the disintegration of the Empire and the success of the English against the Indian rulers. It ultimately sealed the fate of the Mughal Empire.

The Mughals did not develop a proper system of education. It started affecting adversely the then society in every field of life from the beginning of the 18th century. The society failed to produce good administrators, politicians, thinkers, teachers etc. The Empire, therefore failed to get services of talented people and that definitely weakened the Empire.

The Mughal rulers never attempted to build up a navy to safeguard the sea-cost of their Empire. Of course, the Mughals had not to fight against the European powers and therefore, absence of navy was not directly responsible for the downfall of the Mughal Empire. But the neglect of building a navy by the Mughals or any other Indian ruler proved their weakness when Europeans became contenders for political power. Therefore the absence of navy indirectly contributed towards the downfall of the Mughal Empire.

Failure of economic and administrative policies

Dr. Satish Chandra was the first among scholars who pointed out that the failure of Mansabdari or Jagidari system was primarily responsible for the downfall of the Empire. He expressed the view that his system burdened the peasants to the extreme, yet failed to provide the Empire and the required state exceeded its income. It could not continue for long. The Empire resulted in rivalry between nobles for getting good jagirs which weakened the Empire administratively and politically. Prof. Irfan Habib also pointed out that primarily economic crisis was responsible for the downfall of the Mughal Empire.

Thus, various causes led to the disintegration and the final collapse of the Mughal Empire. The process of disintegration had begun just after the death of Bahadur Shah I, the successor of Aurangzeb. However, the Empire, in name, lingered on till 1857. After the revolt of 1857, the British wiped out its name as well and assumed the de jure as well as the de facto sovereignty of India. Thus, the Mughal Empire passed away like a diseased person who met his doom gradually, painfully and miserably.

Discuss the causes of the downfall of the Mughal Empire.

2 Comments on “Causes of the Downfall of the Mughal Empire”