Lord Lytton was a man of literary tastes but he suffered from two handicaps. One, that he was not acquainted with affairs in India. Second, Disraeli, the Prime Minister of England had deputed him to India with the specific object of pursuing a forward policy against Afghanistan. Thus, Lytton represented a particular viewpoint and came to India to fulfill certain specific purposes. In foreign affairs, it resulted in the second Afghan War and in internal affairs, his policy proved reactionary which provoked the national sentiment of the Indians. Lytton carried out several administrative changes in India. 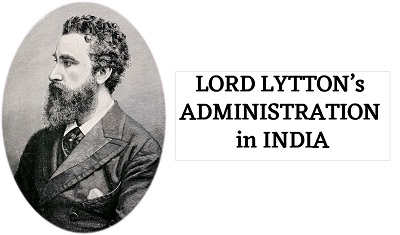 In 1870, Lord Mayo took the initiative of separating central and provincial finances. The provincial governments. were granted fixed sums out of central revenues for administering certain services like Police, Jails, Education etc., as they liked. Lytton took further steps in the direction of this policy of financial devolution. The provincial governments were authorised to meet out the expenditure on certain heads like land revenue, excise, stamps, law and justice etc., as suited them. For this purpose, the provinces were assigned certain sources of revenue like excise, licence fee, etc. It was also decided that the surplus above the estimated income would be shared equally between the centre and the provinces and, in case of deficit, the centre would meet half the deficit of a province. It was expected that the new system would induce the provincial governments to develop their revenue resources.

A serious famine occurred in India in the period 1876 to 1878. The worst affected areas were Madras, Mumbai, Mysore, Hyderabad and parts of Central Madhya Bharat and Punjab. The government failed to provide adequate relief to the famine-stricken people which added further to their miseries. In 1878, therefore, the government appointed a Famine Commission. The Commission recommended that Railways should be constructed and canals dug up in different parts of the country which would minimise the chances of famine. If suggested that a Famine Fund should be created in every province. It also urged that able-bodied persons should be provided employment by the government during the period of famine and only incapacitated ones should be given free help. Thus, the Commission laid down the principles which formed the basis of the subsequent famine policy of the government of India.

The British Government passed the Royal Titles Act. Queen Victoria was invested with the title of Queen Empress of India. Lord Lytton held a Darbar at Delhi on January 1, 1877 to proclaim the title of Queen. He spent huge amount of money on pomp and show of the Darbar. At that time, India was in the grip of famine. Therefore, the Indians felt very bitter about it.

The House of Commons passed a resolution in July, 1877 which recommended abolition or reduction of import and export duties to the government of India because it suited British economic interests. Lord Lytton accepted the spirit of the resolution and, in spite of poor financial condition of India caused by the famine, abolished import duties on twenty-nine articles. But it failed to satisfy the British cloth manufacturers. Therefore, Indian economic interest was further sacrificed and, in 1879, the duties on the coarser kinds of imported cotton were removed. Thus, Lytton became an easy instrument of intensifying economic exploitation of India by Britain.

Newspapers were published in India in several local languages by that time. Most of them expressed the grievances of the people against the British rule and particularly against the measures taken by Lytton. Lytton, therefore, restricted the liberty of the Indian Press by the Vernacular Press Act. By it, magistrates were empowered to secure undertaking, not to publish anything likely to create feeling of disaffection against the government or create differences among the people from the publishers of vernacular newspapers. They could ask the publishers to deposit money as security which could be forfeited in case of contravention of the regulations. The measure, thus, curbed the liberty of the Indian Press which was helpful in forming public opinion against the British rule. The Indians, therefore, resented it.

Another repressive measure of Lord Lytton was the Indian Arms Act. By it, the Indians were asked to seek licence or permission to keep, sell or purchase arms. The offenders were to be punished both with fine and imprisonment for a maximum period of seven years. The Act itself and the discrimination which it made between the Indians and Englishmen on the basis of race, was bitterly resented by the Indian people.

The Charter Act of 1833 had declared that all Indians would be entitled to get government jobs on merit. The Charter Act of 1853 had made the Provision of holding a Competitive examination in London for recruitment to high services under the Company. The Indians were allowed to compete in that examination. Thus, the right of the Indians to get even the highest jobs; Civil Services on merit was accepted by the government in principle though, in practice, every possible effort was made to check their entry into them. Lord Lytton straightforwardly proposed to debar the Indians from the covenanted services. But his proposal was not accepted by the British Government. He, then introduced the Statutory Civil Service in India. It was decided in 1879 that on the recommendation of provincial governments the government of India could employ some Indians of good social standing in the services though confirmation of their jobs was to be sought from the Secretary of State for India. The members of this Statutory Civil Service were to enjoy equal status with the members of the Covenanted Services. Their number, however, could not exceed one-sixth of the total number of the members appointed to the covenanted service in a year. The British Government accepted this scheme. The Statutory Civil Service scheme was a temptation for the Indians with a view to dampening their spirit to compete for covenanted service. Besides, it gave positions of influence only to those Indians who were loyal to the British. Therefore, the Indians did not like it. It was dropped by the British Government after eight years.

Besides, the maximum age for competition in the examination for covenanted service was twenty-one years so far. It was now reduced to nineteen years by the British Government. It, therefore, became further difficult for the Indians to compete for that examination. It, in fact, meant denial of entry to Indians into high services of the Indian government.

Thus, most of the administrative measures of Lord Lytton went against the interests of the Indians. Lord Lytton was concerned only with the security of the Empire and cared least for the interests and sentiments of those over whom he ruled for nearly four years. Therefore, he has been regarded as one of the most reactionary governors-general of India. Yet, his measures helped the Indians in another way. The national feelings of the Indians were further roused by his reactionary measures.

Tags : PDF for UPSC exam short notes on the second Anglo-Burmese war. When it occured? Causes and result of the war.

“Lord Lytton was the most reactionary governor-general of India.” Comment.