Town planning is the unique feature of Indus valley civilization. Their town planning proves that they lived a highly civilized and developed life. Indus people were the first to build planned cities with scientific drainage system. The Indus cities were built on an uniform plan. Town planning was amazing in nature. A few cities have citadels to the West built on higher platform and to the east of which is the hub of residential area. Both of them are surrounded by a massive brick wall. The cities without citadel are found on high mounds.

The streets were straight and cut each other at right angles. They were 13 to 34 feet wide and were well lined. The streets and roads divided the city into rectangular blocks. Archaeologists have discovered the lamp posts at intervals. This suggests the existence of street lights. Dustbins were also provided on the streets. These prove the presence of good municipal administration.

One of the most remarkable features of the Indus valley civilization is that the city was provided with an excellent closed drainage system. Each house had its own drainage and soak pit which was connected to the public drainage. Brick laid channels flowed through every street. They were covered and had manholes at intervals for cleaning and clearing purposes. Large brick culverts with corbelled roofs were constructed on the outskirts of the city to carry excess water. Thus Indus people had a perfect underground drainage system. No other contemporary civilization gave so much attention to cleanliness. 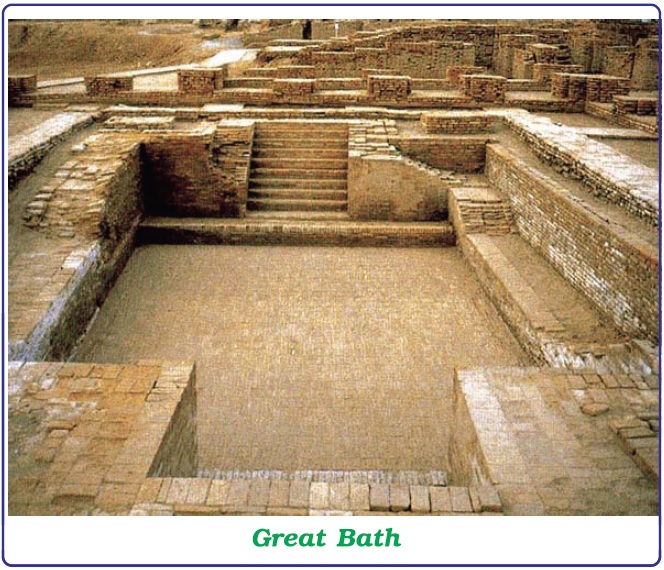 The most striking feature in Mohenjodaro is the Great Bath. It consists of a large quadrangle. In the centre, there is a huge swimming pool (approximately 39 ft long, 23 ft wide and 8ft deep) with the remains of galleries and rooms on all four sides. It has a flight of steps at either end and is fed by a well, situated in one of the adjoining rooms. The water was discharged by a huge drain with corbelled roof more than 6 ft in depth. The Great bath had 8 ft thick outer walls. This solid construction has successfully withstood the natural ravages for 5000 years. There were arrangements for hot water bath in some rooms.

The largest building in Mohenjodaro is granary which is 45.71 mtrs long and 15.23 mtrs wide. In Harappa there are a series of brick platforms which formed the base for two rows of 6 granaries each. In the Southern part of Kalibangan brick platforms have also been found. These granaries safely stored the grains, which were probably collected as revenue or store houses to be used in emergencies.

People of Indus valley civilization built houses and other buildings by the side of roads. They built terraced houses of burnt bricks. Every house had two or more rooms. There were also more than one storied houses. The houses were designed around an inner courtyard and contained pillared halls, bath rooms, paved floors, kitchen, well etc. Besides residential quarters, elaborate structures have also been found. One of these buildings has got the biggest hall measuring 80 ft long and 80 ft wide. It might have been a palace, or temple or hall for holding meetings. The workmen quarters are also found. There was an excellent system of water supply. There were public wells by the side of streets. Every big house had its own well. They also built a dockyard at Lothal.