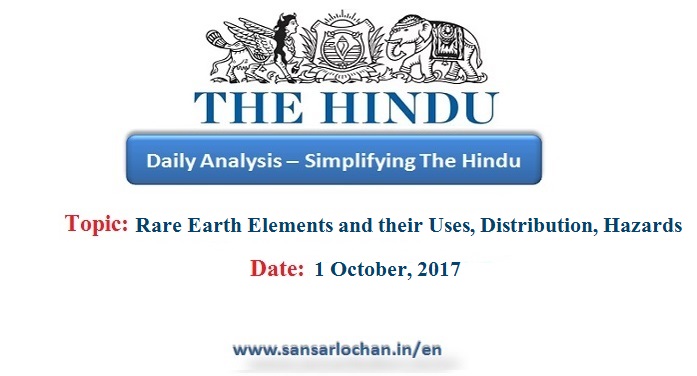 Rare earth elements are a set of 17 chemical elements. These elements are not exactly rare, but are relatively plentiful in Earth’s crust. In fact cerium, one of such elements, is the 25th most abundant element. But these elements are called rare because they tend to occur together in nature and hence are difficult to separate.

Except scandium, all rare-earth elements are heavier than iron and thus are believed to have been produced by supernova nucleosynthesis or the S-process in asymptotic giant branch stars.

Until 1948, most of the world’s rare earth elements came from placer sand deposits in India and Brazil. In the 1950s South Africa was the world’s main source of such elements. From 1960s to 1980s California was the leading producer. As of today, China is the top producer. She produces over 95% of world’s supply. China has over recent years curtailed production and export of rare earth elements in order to encourage domestic extraction and secure preferential use of those materials by Chinese manufacturers. This has led other countries to explore alternative sources. Recycling is also a significant option. In Japan and France rare earth elements are being extracted from used electronics, fluorescent lamps, magnets and batteries.

Below is produced a list of all 17 rare earth elements and their respective uses in industry and medicine.

Mining, refining and recycling of rare earths have serious environmental consequences. Thorium and uranium commonly occur in rare earth elements ores. Extraction therefore is accompanied by radio active slurry. Release of toxic wastes into the general water-supply has been reported in China.

Environment Question for UPSC from the above Article:

What are rare earth elements? Are they hazardous for the environment? Elucidate.

One Comment on “Rare Earth Elements and their Uses, Distribution, Hazards”