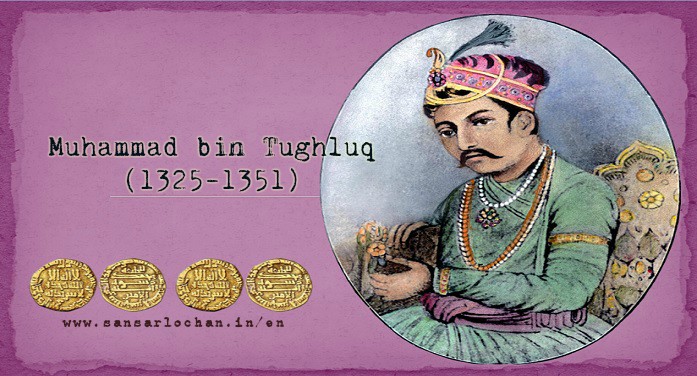 Muhammad bin Tughlaq was born in 1300 in Multan, Pakistan. After the demise of Ghiyasuddin Tughlaq, his eldest son Fakhruddin Muhammad Juana Khan alias Muhammad bin Tughlaq, mounted the throne at Tughlaqabad. Muhammad bin Tughlaq’s character was a mixture of opposites and extremes. He ruled for twenty-six years (1325-1351). Some of his administrative mistakes made him unpopular, and were responsible for his failure as a ruler. Below is given a short description of his life and accomplishments.

He is said to be the most highly educated of all the preceding sultans of Delhi. He was a scholar of Persian and Arabic. He was also well-read in the subjects of mathematics, astronomy, medicine, philosophy and logic. Muhammad bin Tughlaq knew by heart a great deal of Persian poetry, understood it well and, in his conversation, often quoted Persian verses; he was a good calligraphist as well.

Muhammad bin Tughlaq had received excellent military training. He began his career as a soldier. He was promoted as “master of the horse” by Sultan Mubarak Shah Khalji. He is said to be a man of high moral character and led an austere life like his father.

The reign of Muhammad bin Tughlaq started with a confident note. His father is reported to be a capable monarch who had enjoyed the confidence of his people. Muhammad inherited a vast empire from his father. However, he was an abstract thinker and an innovator in the field of state albeit he was an idealist, and not a practical statesman; therefore, the radical changes brought about by him in the state policy foundered against the rocks of improbability. Like Alauddin Khalji, he was a great expansionist who was eager to extend his sway over the whole of the Indian subcontinent. Muhammad bin Tughlaq believed in the geopolitical entity of India and the oneness of its people. He had a clear concept about the political unity of India. He wanted to expand his reign to far South. He threw open higher services to all the Indians on merit and did not discriminate between the Hindus and the Muslims in matters of state policy. In his political outlook, Muhammad bin Tughlaq was unique among the sultans of Delhi. He was surely a man with ideas far ahead of his times.

Transfer of the Capital

The first grand project, conceived by Muhammad bin Tughlaq, was to transfer his capital from Delhi to Devagiri, which was renamed Daulatabad. However, Devagiri was in no way situated in the heart of Muhammad bin Tughlaq’s empire. It was not equidistant from the north-western, eastern and southern boundaries of the sultanate. If the sultan attributed a “central” position to Devagiri, it could be justified only when he attached little importance to his dominions, situated to the east and north-west of Delhi. Therefore, Devagiri did not prove an ideal capital for the Turkish empire of India. Although it may be conceded that Delhi as the imperial capital did have some shortcomings, and so the idea of locating a more centrally situated headquarters was not illogical; albeit the choice of Devagiri was wrong. As a result, Muhammad bin Tughlaq had to move like a pendulum between Delhi and Daulatabad to address the various administrative and political problems.

Introduction of token currency was the second heretofore unheard project launched by Muhammad bin Tughlaq. It is basically a modern concept that does not need much elaboration; we live in the age of token currency where the mere contemplation of the intrinsic value of the concepts of paper notes and coins may be dubbed a foolery. Muhammad bin Tughlaq, on the other hand, earned the nickname of a “fool” because he conceived of such an advanced measure to revolutionize the Indian economy in the fourteenth century. He has been described by Edward Thomas as the “Prince of Moneyers”. Soon after accession, he made extensive reforms in the system of coinage. He fixed the relative values of the the bullion and issued several types of coins with the object of facilitating exchange and circulation.

The country of Khurasan formed a part of the Persian empire of the Ilkhan Mongols. Qarachil was on the other hand, a region on Indo-Tibbet border. Md. Tughlaq organised an expedition to capture both Khurasan and Qarachil with the help of his allies. However, he had to call off the expedition. The Khurasan expedition did not materialise and the Tughlaq’s army could not be put to use; its maintenance and equipment caused a notable drainage of wealth.

Revenue Reforms: Taxation in the Doab

The above-noted measures undertaken by Tughlaq, viz., the transfer of the capital, the experiment of of token currency, Khurasan and the Qarachil expeditions, had disastrous effects on the finances of the state. The royal treasury was almost emptied. The Sultan was bound to think of new ways and means for enhancing the revenues of the state. He launched the fifth and the last major project pertaining to “the enhancement of taxation in the Doab.” This measure also ended in smoke and had disastrous effects on the fortunes of the Tughlaq empire.

Historians believe that Muhammad bin Tughlaq is the most tragic personality among the sultans of Delhi. According to some British historians, he was one of the greatest rulers of early medieval India although his character and performance have been the subject of controversy ever since his own times. His subjects misunderstood him, the bureaucracy could not understand his policies and programmes. The contemporary chronicles however failed to evaluate correctly the achievements and failures of his reign.