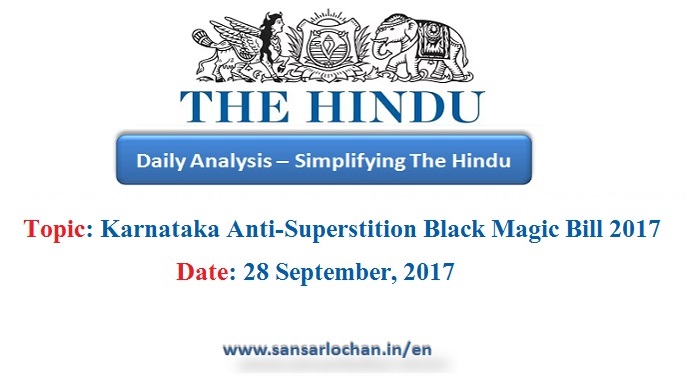 Of late there have been some cases in which activists campaigning against superstitions in general have been silenced by murder or other types of physical assault. Such type of cases have incidentally happened in South India, specially Karnataka. Apart from this, some social customs like jalikattu have recently been subject of strident debate often leading to judicial intervention. Incidents of black magic, witchcraft and inflicting physical pain to oneself etc. regularly surface in different parts of the country.

What if Black Magic Bill 2017 is passed?

Public opinion built up in this context overly has been in favour of enacting a law against evil practices and superstitions. In the light of such demand the Karnataka Government has given consent to a bill in this regard, namely, Karnataka Prevention and Eradication of Inhuman Evil Practices and Black Magic Bill, 2017. Now this Bill will be placed in State Assembly for nod. If passed, this Bill is expected to end different inhuman practices such as witchcraft, black magic and any act in the name of religious practice causing injury to humans and animals. The speciality of this Bill is that it does not only mention the practices which are to be banned but also specifies ones which have been kept out of the purview of such ban.

From the perusal of the practices which the Bill does not disturb, it would be clear that all types of religious acts which are not physically harmful have been allowed. A special feature of the Bill is that it does not ban vaastu shastra and astrology, something that will not go well with hard-core rationalists. The Bill is also soft on miracles as the same do not involve any kind of physical harm.

All types of prayers, upaasana and rituals held at home or in religious places have been kept beyond proscription. Piercing of ears and nose of children as per rituals and kesha lunchan performed by Jains have been permitted under the Bill.

Proposals of the Bill

The Karnataka Anti-Superstition Bill proposes ban on the following practices : –

Ethics Question for UPSC from the above Article:

Do you think that the Government will be able to implement the provisions of the Bill in case of all religions uniformly?