The English conquest of India started from the kingdom of Bengal which, at that time, included the provinces of Bengal, Bihar and Orissa. The first conflict of the English with the Nawab of Bengal resulted in the Battle of Plassey on June 23, 1757. 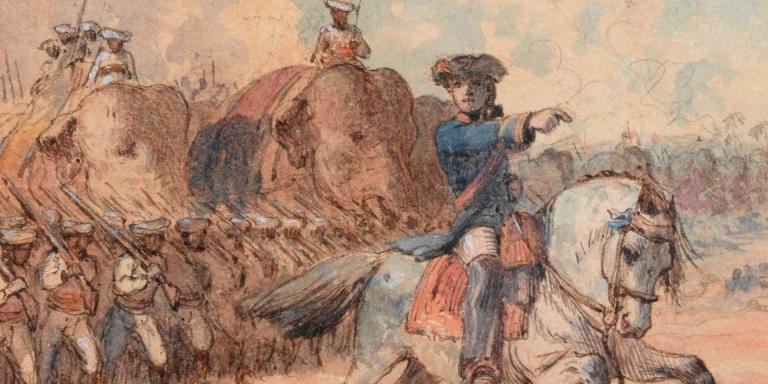 Causes of Battle of Plassey

Siraj-ud-daulah succeeded his grandfather, Alivardi Khan, to the nawabship of Bengal in 1756. He desired to use his powers as a ruler as effectively as were used by his predecessors while the English, emboldened by their success against the French in south India, desired to engage in fresh adventures and therefore refused to accept his authority. Siraj felt that the English not only refused to obey his commands but, probably, were intriguing with his enemies against him. The behaviour of the English confirmed his suspicion. The English did not give presents to him at the time of his coronation. At one time, the English refused him permission to visit their factory. The English gave shelter to Krishna Ballabh, son of Raj Ballabh, the diwan of Ghasiti Begum and refused to hand him over to the Nawab even when he specifically asked for it.

The Mughal emperor Farrukhsiyar had permitted the English to trade in Bengal without any payment of tax. The Nawab did not like it because that adversely affected his income and placed the native traders in a disadvantageous position vis-à-vis the English. Yet, he somehow bore with it. But the English misused their right. They used to sell dastaks (free passes which declare that the goods belonged to the English and, therefore, were exempted from trade tax) to Indian merchants. When the Nawab tried to check this malpractice and attempted to punish the guilty Indian merchants, the English provided protection to them. This was the main cause of resentment of the Nawab against the English.

The fortification of Calcutta by the English

The English foresaw the possibility of a war against the French. Therefore, they started strengthening the fortification of Calcutta and dug a ditch around the fort. The Nawab did not like it and ordered the English to fill up the ditch. The English refused to obey the command of the Nawab. On the contrary, some impertinent English officer is reported to have spoken to the officers of the Nawab that “the ditch shall be filled up provided it be with the heads of the Moors.” This enraged the Nawab who eventually decided to punish the English.

Siraj attacked the English factory at Kasimbazar and captured it. On June 16, 1756, he attacked Calcutta. Realizing the futility of the resistance, the English governor Drake fled away to the island f Fulta with most of the English residents. Mr. Howell, with a handful of Englishmen, defended the Fort William. He however had to surrender on June 20. It is said by some English historians that the sad “Black Hole Tragedy” took place that very day. It is said that one hundred forty six persons were imprisoned in a small room that night. In the morning there were only 23 survivors. Rest of the people died during the night. But now no objective historian accepts this story as true. When the news of the disaster at Calcutta reached Madras, reinforcement was dispatched both by sea and land route. While Watson moved with ships, Clive marched with soldiers. They captured Calcutta on January 2, 1757. The Nawab moved towards Calcutta but after a minor engagement agreed for peace and the treaty of Ali Nagar (Calcutta) was signed. It was at best a truce. The English were afraid of a French alliance with the Nawab while the Nawab feared an invasion by Ahmad Shah Abdali who had captured Delhi. Therefore, both parties desired peace to gain a little more time. By the terms of the treaty the English got whatever they desired, viz., right to fortify Calcutta to trade without custom-duty, to mint coins, compensation for their losses, etc. Yet, they were not satisfied. They encouraged all those who were against the Nawab and became a party to a conspiracy against the Nawab. The Nawab had displeased many people by his actions. He was a bit intolerant towards the Hindus and had displeased many a Hindu and Muslim noble. Besides, Hindu traders and the English merchants had mutual trade interests to defend. All these disgruntled people conspired against the Nawab. They persuaded the English to become a party to it and the latter did so readily. It was decided that after the dethronement of Siraj, Miraj Jafar would be placed on the throne. Ami Chand, a merchant who had worked as a broker between the parties, however, threatened to disclose the conspiracy to the Nawab of it was not agreed that he would be paid rupees thirty lacs and 5% of the Nawab’s treasury after the success of the plan. Clive prepared two treaties – the only by which Ami Chand was promised to pay what he desired and the other wherein no mention was made of it. The first one was a false treaty and Watson, therefore, refused to sign it. Clive then fabricated the signature of Watson and Ami Chand was, thus, silence. When everything was settled, the English placed impossible demands before the Nawab. When the Nawab refused to accept them, Clive proceeded towards Plassey with his army. The Nawab also proceeded towards Plassey. The battle was joined on June 23, 1757. It was a battle only in name. The major part of the Nawab’s army, led by Mir Jafar and Rai Durlabh took no part in the battle. The English lost only twenty nine soldiers while the Nawab lost nearly five hundred. The Nawab was forced soldiers while the Nawab lost nearly five hundred. The Nawab was forced to flee. He was, however, captured near Raj Mahal and dispatched to Murshidabad where he was killed by Miran, son of Mir Jafar. Mir Jafar was declared the Nawab of Bengal.

Results of Battle of Plassey

Militarily, the battle of Plassey had no significance. The larger part of the Nawab’s army had not participated in the battle because of the treachery of Mir Jafar and Rai Durlabh. The success of the English was not due to their military strength but because of a conspiracy. K.M. Panikkar writes : “Plassey was a transaction in which the rich bankers of Bengal and Mir Jafar sold out the Nawab to the English.”

But the battle of Plassey proved important in many other respects. The English Company, its officers and servants drew immense financial advantages. The Company was granted undisputed right to trade free of tax in Bengal, Bihar and Orissa, received the zamindari of twenty-four parganas near Calcutta and a huge sum of compensation. The officers of the Company were also paid huge amounts of money as bribe or reward. It is believed that Nawab Mir Jafar was forced to sell even the household effects in order to satisfy the lust for wealth of the servants of the company. The prestige of English Company soared high after the battle of Plassey. It exposed the political weakness of India. It also proved that the Hindu traders and jagirdars were prepared to support even the foreigners against the rulers of the decadent Muslim states.

Politically, the battle of Plassey had far-reaching consequences. The English became the de facto rulers of Bengal. The English utilized the resources of Bengal to enhance their financial and political interests in Bengal. They could maintain and equip a large army which played a decisive role in exterminating not only the French in India but gradually native rulers as well. Yet, the battle of Plassey was not the final round of the struggle between the English and the Nawabs of Bengal. There was to be one more battle – the Battle of Buxar.

The Deposition of Mir Jafar from the throne of Bengal

Mir Jafar was an incapable ruler and a weak person. He failed to maintain even the respect due to the Nawab. In February 1760, Clive went back to England and that sealed the fate of Mir Jafar. Mir Jafar desired that the English should make him free from further financial liabilities while demands of the Company went on increasing. The English decided to dethrone him. Mir Kasim, son-in-law of the Nawab and the commander of the army, became the prospective candidate for the Nawabship and the English made a settlement with him. Mir Jafar was called to Murad Bagh, charged with the mismanagement of the affairs of state and asked to abdicate the throne. Mir Jafar was not even allowed to go back to his palace. Feeling himself helpless, he resigned the throne in favour of Mir Kasim in 1760 and agreed for a pension.

Questions for UPSC mains : Analyse the main stages of the establishment of British power in Bengal from 1757-1765.

Discuss the circumstances leading to the establishment of British rule in Bengal.

“The Battle of Buxar completed the work of the battle of Plassey.” Discuss