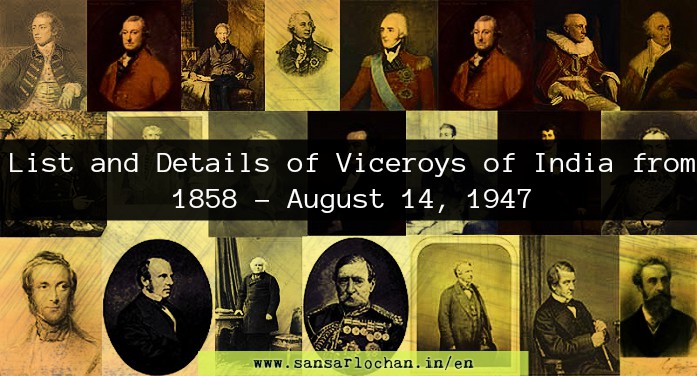 Below is presented a brief information regarding the Viceroys of India who ruled from 1858 to 1947 and the main events that occured under their regimes. As we are aware the office of Viceroy was created in the aftermath of the upheaval of 1857. From 1858 onwards, the British Crown took the reins of administration in its hands and the Viceroys worked as deputees on its behalf. Lord Canning was the first Viceroy and the last of the chain was Lord Mountbatten. As the last Viceroy Mountbatten presided over the withdrawal of the British power from the Indian sub-continent. Interestingly this Viceroy was retained by the Indian politicians as the Governor General of India for some time as well.

Queen Victoria’s proclamation of 1858 led to transfer of the Government of India from the East India Company to the Crown. Canning’s work was “conciliation, settlement, reconstruction and reorganization”.

The Vernacular Press Act imposed certain reinstruction on the Indian Press. The Arms Act prohibited the Indians from carrying arms without a license. He is known for his reactionary spirit.

a) Ripon was a true liberal of Gladstonian era. He symphathised with the Indians and encouraged their  legitimate aspirations.

b) He repealed the Vernacular Press Act, passed the Local Self Government Act, took steps to improve primary and secondary schools, passed a Factory Act to protect the town labourers and sought to remove judicial disqualifications based on race and distinctions by the Ilbert Bill.

a) Lord Curzon kept peaceful relations with the N.W. Frontier Tribes and Afghanistan.

b) He took effective steps to protect British interests in Persia.

c) The Tibetans were defeated by him, they had to pay a heavy war indemnity. Curzon allowed British Govt. to control their foreign policy.

d) Punjab Land Alienation Act was passed in 1900, by which the lands of cultivators could not be transferred to money-lenders or non-agriculturists by sale or mortgage.

e) By the Indian University Act (1904) Lord Curzon officialised the Universities, since they were to have a majority of nominated members on the Senate.

f) In 1905, he partitioned Bengal into two separate provinces – a) West Bengal b) Eastern Bengal and Assam. There were agitation all over the country against this partition which had to be annulled in 1911.

There was great political unrest in India. The Indian Councils Act of 1909 of Morley-Minto Reforms was half-hearted measure, and it failed to satisfy Indian political aspirations. Lord Minto conceded separate electorates to the Muslims in the legislatures.

Under his tenure following things happened:-

a) A Durbar was held at Delhi in December 1911 to celebrate the coronation of His Majesty King George V.

b) Partition of Bengal was cancelled.

c) Delhi was made the capital in place of Calcutta.

d) A bomb was thrown by some unknown person at the Viceroy who escaped unhurt.

Under his tenure following things occurred:-

b) Rowlatt Act was introduced

a) The visits of the Duke of Connaught and Prince of Wales to India were boycotted.

b) There was strong agitation (riots, strikes) and civil disobedience movements all over the country against the Government.

Under his tenure following things occurred:-

a) Simon Commission’s visit to India in 1927 was boycotted by the people.

b) Resolution of complete independence for India was passed by the Indian National Congress at Lahore on 31st Dec. 1929.

d) Round Table Conferences in London in 1930.

a) Second Round Table Conference was held in London 1931.

b) Communal Award was announced by Ramsay MacDonald.

c) Mahatma Gandhi decided to fast unto death to remedy the defects of Communal Award.

e) Third Round Table Conference was held in London in 1932.

b) Congress Ministries were formed in eight out of eleven major provinces.

d) Congress Ministries resigned in 1939 as the Govt. did not clarify the war aims.

e) Cripps’ Reforms to India in March 1942 to discuss Indian constitutional reforms both during and after the war, it was a failure.

a) Goodwill Mission to India

b) The Wavell Plan

e) First meeting of the Constituent Assembly was held on 9th December, 1946

a) June 3 Plan of the Government was proclaimed as the only solution of Indian constitutional deadlock.

b) Partition of the country was recommended to satisfy the Muslims.

c) Indian Independence Act was passed by the British Parliament in July 1947 by which India became free on August 15, 1947 and it was divided into two Dominion of India and Pakistan.

Viceroys of India Who Have Been In The British Cabinet