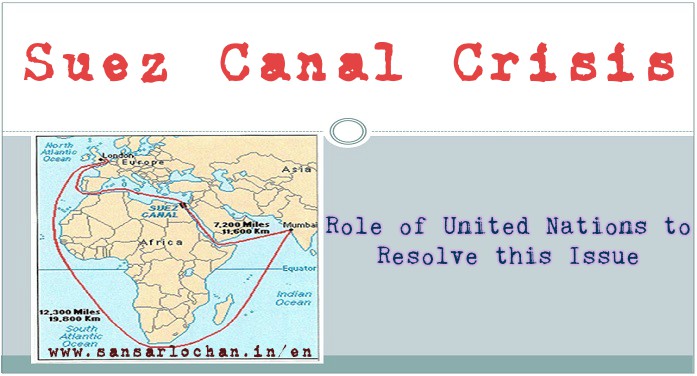 As we have already seen in our previous article how the United Nations plays important role in solving international issues. In this article, we are taking the example of Suez Canal Crisis where an important organ of UN i.e. General Assembly played a big role to resolve the issue.

The General Assembly of United Nations

Suez Canal links the Mediterranean with the red Sea. It was constructed by the French in the 1860s. Ownership soon passed to the British. As the canal provided the shortest route to India (and, in later years, the Persian Gulf oil fields), its safety was vital  to the British. They decided that they required a permanent military presence in Egypt to guard it.  Suez Canal runs through Egypt but is utilized by ships of many nations which would otherwise have to cruise all the way around Africa. In July, 1956, Egypt nationalised this Canal, which was being operated by a private French and British company, and declared that Egyptians would run it now.

The issue was before the Security Council when, on October 29, 1956, Israeli armed forces moved into the Egyptian Sinai Peninsula. Three days later British and French troops landed at the northern end of the Suez Canal. There was a veritable fear that the fighting could cause a larger war.

The General Assembly was called into emergency session. It pressured Israel, Great Britain and France to stop fighting and withdraw their forces from Egypt. It voted to create a United Nations Emergency Force, called UNEF. The force would not be a fighting force, but a peace force sent with the consent of both sides.

Within a few days, the conflict had been stopped and the first UNEF troops arrived to separate the two sides. Within a few weeks, all the British, French and Israeli troops withdrew back.

The UN made this peace with an emergency force of some 3,000 to 5,000 men only. But this small force was backed by the approval, or moral authority, of the community of nations in the United Nations.

The Suez Canal Crisis is a striking illustration of what the United Nations can do to keep peace. It shows how mighty is the power of world opinion. For no nation wants to commit a deed that will be looked upon with disapproval by most of the other nations of the world.