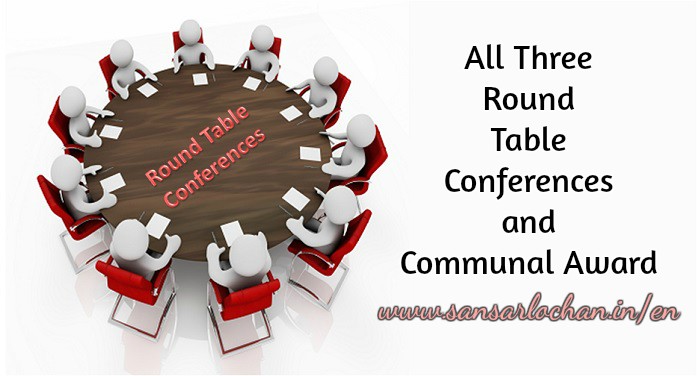 Today we will discuss the basic details regarding Three Round Conferences (First, Second and Third) as well as their importance in Modern Indian History. We will also mention the background and outcome of Communal Award which was introduced by Ramsay MacDonald.

The report of Simon Commission failed to satisfy the Indians. The Congress in its session at Lahore in 1929, under the presidentship of Pt. Jawaharlal Nehru, passed a resolution demanding complete independence for India. Mahatma Gandhi started the Civil Disobedience Movement and broke the Salt laws. The historic Dandi March was undertaken by Mahatma Gandhi. The Non-Cooperation Movement was in its full swing and more than fifty thousand persons were sent to jail for political offences. On 31st October, 1929, the Viceroy announced the intention of His Majesty’s Government to hold a Round Table Conferences after the publication of Simon Report, to elicit the opinion of Indian representatives concerning constitutional advance. Lord Irwin also reiterated the policy expressed in an announcement – that the national issue of India’s constitutional progress was the attainment of Dominion Status .

The announcement was well-received by the Liberals, though the Congress imposed precedent conditions for participation. Efforts of leaders like Sir Tej Bahadur Sapru resulted in negotiations between the Viceroy and Congress leaders (Mahatma Gandhi and Pt. Motilal Nehru, etc.) but all in vain.

The Delegation included 57 members from British India, 16 from Indian States and 13 from British political parties, notable among them being: –

The First Round Table Conference was held in London on Nov. 12, 1930 but the Congress did not participate in it. In March 1931, Mahatma Gandhi and Lord Irwin (Viceroy of India 1926-31) entered into a Pact, called Gandhi-Irwin Pact, by which the Congress called off the Civil Disobedience Movement and agreed to participate in the Round Table Conference in London. Mahatma Gandhi was nominated as the sole representative of the Congress.

The first session laid down the following main principles:-

i) The form of the Constitution would be an all India Federation embracing British Indian Provinces and those States which agreed to join the Federation.

ii) The responsibility of the Executive to the Legislature at the Centre, subject to certain reservations and safeguards for the period of transition.

iii) The government in Governors’ Provinces to be reconstituted on the basis of full responsibility.

The Second Round Table Conference was held in London on 7th of September, 1931 but nothing was finally decided, as the various communities of India could not come to an understanding regarding the distribution of seats on communal basis in the Provincial and Central Legislatures. The matter was left to the final arbitration of the British Prime Minister, Ramsay MacDonald. Mahatma Gandhi, immediately after his return from London, in the beginning revived the Civil Disobedience Movement. The Government suppressed the movement, and jailed Gandhiji, and many responsible Congress leaders.

Ramsay MacDonald announced the Communal Award in 1932. Owing to the repeated failure of the communities to arrive at a concerted decision regarding proportion of representation, the British Govt. announced a scheme of representation in the Provincial Assemblies.

The Communal Award distributed seats as under:-

The table of distribution avoided the term “Hindu”, in place of which the heading “General” was substituted. The Depressed Classes were to vote in the General Constituencies as well as their special seats for a period of 20 years – a stipulation which was later modified by the Poona pact (Sept 1932) due to the efforts of Gandhiji. It provided for the absorption of the 71 special depressed class seats into the General Constituencies in lieu of reservation of 148 general seats for the depressed classes to be filled through electoral colleges. The electorate for each special women’s seat was limited to voters from one community.

The Communal Award did not satisfy the Hindus as it sought to disrupt the Hindu community by conceding the right of separate electorates to the Harijans. Mahatma Gandhi undertook, while still in jail, a fast unto death to maintain the unity of the Hindu society. It caused a great commotion in the country, and finally the Hindu and Harijan leaders signed the Poona Pact to  modify the Communal Award.

The new decisions arrived at the Second Round Table Conference may be outlined as under:-

i) Separation of Burma.

ii) Communal principle of representation in the Provinces.

iii) Extension of franchise and creation of female electorates.

iv) The raising of North-West Frontier Province to the status of a Governor’s Province.

It was decided to constitute a working Committee in India which came to be called the Consultative Committee, to fill up the gaps left out. In addition three other sub-committees were formed, which visited India in the early part of 1932. These were Federal Finance (Percy) Committee, Indian Franchise (Lothian) Committee and Indian States Enquiry (Davidson) Committee.

The Third Round Table Conference was held in London on 17th  of November, 1932 to consider the reports of various sub-committees appointed from time to time. It ultimately led to the passage of Govt. of India Act, 1935. Following the publication of Communal Award, the third Session, or “the Pocket” R.T.C.  met in London to discuss a fixed agenda in private. It was smaller and more informal than the previous ones. The Congress did not participate as most of the leaders were in jail.

2 Comments on “All Three Round Table Conferences and Communal Award”