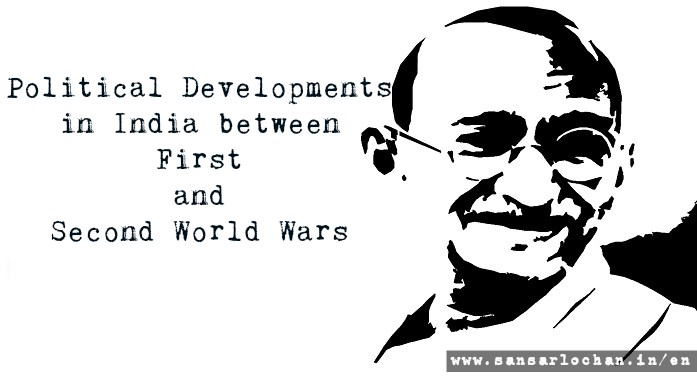 The First World War, originally called the Great War, was a historical landmark not only for European nations but also the colonies under their governance. As we would see below this war raised between 1914-1919 impacted the political developments in India.

Aspirations towards nationalism and independence were strong enough in India for years. But during the First World War, when revolt might have succeeded, India was in general loyal to the British flag. To reward this loyalty, and to satisfy the demands of Indian nationalists, Great Britain in 1919 adopted the Government of India Act –  a compromise between British rule and home rule agitators.

A central legislature, elected by the rich classes, was created to pass laws and to vote taxes. In each province there was also an elected legislature, with authority over certain specified matters, such as education and public health. But the British Governor still had the upper hand.

However, the taste of political privilege given to the people of India did not allay their discontent but rather stimulated it. The spirit of nationalism asserted itself more boldly than before. The more extreme nationalists were ready for revolution, by arms if necessary. The moderates sought self-government under the British flag by peaceable means.

The outstanding figure in the nationalist movement was Mohandas Gandhi, usually called Mahatma Gandhi. “Mahatma”  means “great soul” or “saint”. His character, his aims and his methods attracted worldwide attention. He did not favour revolution by war, neither did he advocate tame submission to foreign rule. He proposed to break up the British government of India by refusing to cooperate with it and by positively obstructing it. He said that the people of India should not only refuse to hold public office but should also refuse to attend public schools, to pay taxes, to buy British goods, and to appear in court. Some of them, strongly under the spell of Gandhi’s spirit, actually sat down in front of railway trains, thus refusing to let the trains run. To those who said that India was not yet fit for independence and self-government, Gandhi replied that no people can ever become fit to govern itself that is treated as unfit by foreign masters.

Great Britain declared that India could look forward to achieving self-government in a distant feature, but not immediately. British control over India’s military and financial affairs was carefully safeguarded in a new Government of India Act, passed by the British Parliament in 1935. On the one hand, this new constitution gave votes to a larger number (though still a minority) of the people, and it gave the elected legislatures more power. On the other hand it also provided for a federal legislature to represent the whole of India. Read more about>>> Govt of India Act 1935