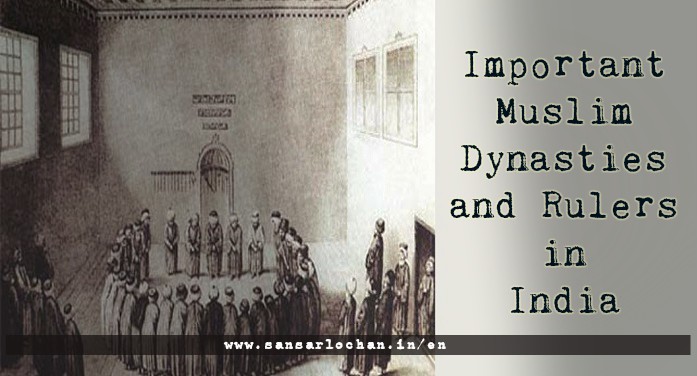 In this article we are giving you a brief note on important Muslim dynasties and rulers in India. As we know in eighth century A.D. there was a huge military expansion of Islam. It cast its shadow on North-West India also. However, this was a temporary phase for Islamic interventions in India. But from 11th century onwards Islam re-visited India on a very large scale and continued to dominate its polity till the advent of European forces. By 1857, the era of Muslim dominance, which was interspersed by Maratha rise, came to an end. In the description below we will have a discourse over various principal Muslim dynasties and rulers who dominated the political scene during the medieval history of India.

Mohammad Bin Qasim conquered Sindh and Multan, but the Arabs failed to expand their dominions, so they could not set up a permanent kingdom in India.

He succeeded to the throne of Ghazni in 997 after the demise of his father Subukatgin. Mahmud Ghazni was a great conqueror and one of the greatest rulers of Asia. Mahmud Ghazni carried to successful completion his ambition of building up an Asian empire. His 17 invasions of India from 1000-1026 were carried out only to satisfy that ambition, as the booty provided the necessary finances. He never had the idea of spreading Islam or of establishing an Islamic empire in India. His repeated invasions weakened the Indian rulers and paved the way for the work of Mohammad Ghori. Once again the North-West passes were opened, and thus the isolation of the country was broken.

In 1186, he occupied Lahore. In 1191, he was defeated by Prithviraj, the ruler of Ajmer and Delhi, in the First Battle of Tarain. In 1192 however Prithviraj was defeated by Mohammad Ghori at Tarain (Thanesar). This marked the commencement of permanent Muslim rule in India. He then took Ajmer, Delhi, Kanauj, Banaras, Gwalior etc.

Qutubuddin Aibek was a slave and one of the Generals of Mohammad Ghori. After Ghori’s demise he became the ruler of Indian possessions. He founded the Slave Dynasty. His contribution to Islam is that he made India an independent political entity ruled by Muslims.

Altmash was the son-in-law of Qutab-ud-din Aibak. He conquered many regions, and became the supreme lord of the whole of Northern India. He was the saviour of the Delhi-Sultanate at a very critical time.

Razia Begum was the daughter of Altmash, and the first Mohammedan woman ruler of Delhi.

Ala-ud-din Khilji ascended the throne by assassinating his uncle and father-in-law Jalal-ud-din Khilji. His reign marked the beginning of Imperial age under Islam. The Southern India was conquered for the first time by a Muslim ruler. His introduced many civil, military and economic reforms. He however was a cruel ruler, which resulted in alienation of his people, and the downfall of the Khilji dynasty.

After the decease of Ghiasud-ud-din Tughlaq, his son Prince Juna succeeded him with the title of Mohammad Tughlaq. His personality was a mixture of opposites and extremes. Some of his novel administrative experiments made him unpopular, and were responsible for his failure as a ruler.

Feroze Shah Tughlaq was a cousin of Mohammad Tughlaq. He was neither a dashing soldier nor a capable and gifted general but he was a peace-loving ruler. Feroze introduced many reforms for the welfare of his people. He is known for his public works. He founded a new city namely Tughlaqabad, near Mehrauli (Delhi).

He was the son of Sikandar Lodhi. He was very tyrannical by nature. His people and nobles were disgusted with him. In 1526, Babar defeated him at Panipat (First Battle of Panipat); Lodhi dynasty ended. Babar laid the foundation of Mughal rule in India.

Babar was the first Mughal ruler on the soil of India. He won victories in the Battle of Panipat, Kanwah and Ghaghra against the Afghans and the Rajputs, and laid the foundations of Mughal rule in India. He was a great lover of nature and was endowed with literary genius.

Humayun succeeded Babar but was soon dethroned by Sher Shah Suri. He had to take refuse in Amarkot. However, his fortunes returned after the death of Sher Shah and he once again became the ruler of parts of North India.

Sher Shah Suri humbled the Mughal ruler Humayun, and forced him into exile. During the brief period of his rule he attempted to set up a national state and introduced some reforms which brought him the title of the forerunner of Akbar. His tomb at Sasaram (Bihar) is considered to be a noble specimen of art.

Akbar succeeded his father Humayun at the age of thirteen. Bairam Khan, a capable general, became his regent. Bairam defeated Hemu at Panipat, 1556 (Second Battle of Panipat), and secured, the throne for Akbar. Akbar’s fame rests on his statesmanlike vision and his liberal policies. He made Rajputs the pillars of the Mughal State. Din-Ilahi was the outcome of his pantheistic and enlightened religious outlook. He left an indelible imprint on Indian art. Mughal Art and Fatehpuri Sikri reflect the character of this great ruler.

His reign is known for improvement in the art of painting and drawing. The years 1611-1627 were greatly influenced by Mehar-ul-Nisa, whom he married and gave her the title of Nurmahal and later on the title of Nur Jahan.

Shah Jahan’s reign is considered the golden age of the Mughal period. In the field of architecture and other forms of art, the buildings of the highest quality in the Mughal period belong to the regime of Shah Jahan like the Diwan-e-Am, the Diwan-e-Khas, the Jama Masjid, Moti Masjid, Taj Mahal and Red Fort are among his famous monuments.

Aurangzeb ascended the throne through a pool of blood. His religious intolerance, policy of over-centralization, suspicious nature and his lack of the qualities of a statesman were to a large extent are elements that are responsible for the downfall of the Mughal Empire.