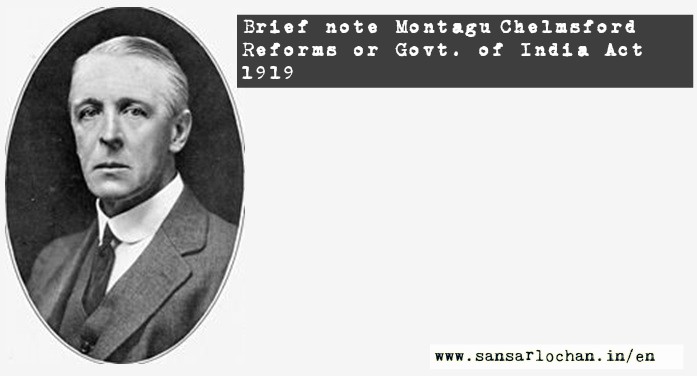 The Montague–Chelmsford Reforms which is also known as Mont-Ford Reforms were introduced by the British colonial government in India to introduce self-governance to India. These reforms were named after Edwin Samuel Montagu and Lord Chelmsford. The former was the Secretary fpr the State of India while the latter was the Viceroy of India between 1916 and 1921. The reforms were in shape of a report which was called Montagu-Chelmsford Report. This report was presented in 1918 and formed the basis of the Government of India Act 1919. The Indian nationalists were not satisfied with the Act because the thought that much more reforms were required for better Governance.

Montagu–Chelmsford Reforms or Govt. of India Act 1919 introduced more changes in the administration of India.

Montagu-Chelmsford Reforms may be broadly and briefly summarized as under : –

a) Bicameral legislature at the Centre.

b) The limitations of number of the members of the Governor-General’s Executive Council removed.

c) Dyarchy introduced in the Provinces, whereby a section of subjects, called “Transferred Subjects” were entrusted to the charge of the Governors acting with Ministers elected by members of Provincial Legislatures and responsible to these bodies and the “Reserved Subjects” continued to be controlled by the Governor and his Executive Council. The Transferred Subjects included Local-Self Government, Irrigation, Forests, Land Revenue, Medical Administration, Public Health, Education, Public Works, Agriculture, Fisheries, Industries, Co-operative, Societies, Registration and Excise.

d) Elected majorities, both at the Centre and in Provinces, Principle of direct elections with communal electorates subject to property qualification introduced.

e) The Councils were given large powers of legislation, advice and interpellations (query), subject to sanction of the Governor-General or Governor, as the case may be.

f) The supremacy of the Secretary of State in Council continued unabated, but provision was made for devolution of powers by means of rules.

g) The Preamble to the Act affirmed the principle announced by Mr. Montagu in his announcement of 20th August, 1917.

h) The Act provided for the appointment of a Commission at the end of ten years to report upon the working of the Reforms and suggest means for further progress.

i) The Act created a High Commissionership for India (in England) to represent the Government of India as far as Indian trade and commerce is concerned. The Commissioner also helps the Indian students abroad.

Today we gave you brief info about Montagu-Chelmsford Reforms. You can save this note as PDF by pressing Print option given above the article. We are soon this article in Hindi and will be published soon on www.sansarlochan.in (Hindi version of this website). We are adding some important History notes for the Civil Services aspirants. Click here for >> History Notes