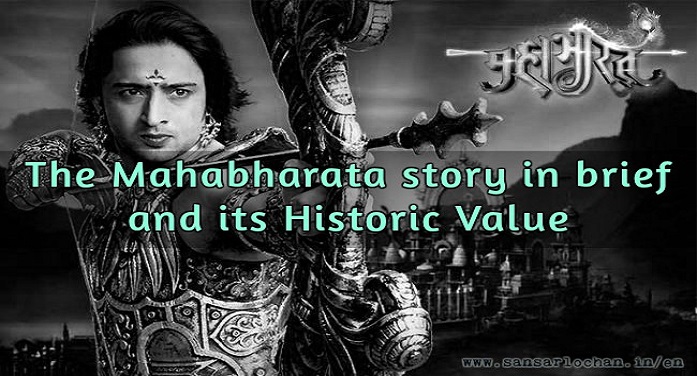 The framework of the epic Mahabharata deals with the great conflict between the Kauravas, the hundred sons of Dhritarastra, and the Pandavas, the five sons of Pandu. The Mahabharata was the final outcome of their long-standing rivalry.

Brief story of The Mahabharata

After the death of Vichitra-Virya, the Kuru ruler, his younger son Pandu succeeded him because his elder brother Dhritarastra, was born blind. But owing to Pandu’s premature death, Dhritrastra himself had to assume the reins of government within a short time. Being fond of his nephew, Yudhisthira, a man of rare virtue, he then nominated him heir-apparent. This aroused the jealousy of his eldest son, Duryodhana, who by his machinations compelled the Pandus to escape from the capital. During their wanderings they went to Panchala, where Arjuna won in a svyamvara the king’s daughter, Draupadi, for himself and his brothers. This alliance proved a turning-point in their fortunes, for with a view to conciliating them Dhritarastra divided his kingdom, giving Hastinapura to his sons, and to his nephews a region of which Indraprastha became the capital. Here, too, the Pandavas were not allowed to reign in peace.

Duryodhana allured Yudhisthira to play with him a game of dice. Yudhisthira lost everything – kingdom, wife, honour – and had to go in exile for twelve years. On the culmination of the period, he tried to get back the lost kingdom, but Duryodhana scornfully rejected Yudhisthira’s terms. This led to a trial of strength. Hostilities lasted eighteen days on the famous battlefield of Kurukshetra, and there was indescribable suffering and slaughter. Finally victory rested with Yudhisthira, who ruled gloriously for a brief period, and then retired to the Himalayas with his brothers, giving the care of the crown to the distinguished Parikshit (son of Abhimanyu).

Historical value of The Mahabharata

In the main the story of the Mahabharata is based on historical truth. Hastinapur and Indraprastha were doubtless real cities. Despite their utter destruction by the ravages of time and the elements, their names still survive. The former is now represented by a hamlet of the same name on the Ganges in the Meerut district, and the latter is recognized in the small village of Indarpat on the Jamuna, near modern Delhi. The traditional case, 3102 B.C. of the famous war between the rulers of the two places will hardly stand the test of criticism, but it has with some plausibility been placed about 1000 B.C. For the Satapatha Brahmana is familiar with the heroes of the epic, and it mentions Janamejaya as almost a recent personage. It is also known that the Kurus were a great people during the later Vedic period, although the Pandus do not at all figure either in the Brahmanas or in the Sutras. They first emerge into view with the later Buddhist literature as a mountain tribe. Does this show, as has sometimes been conjectured, that they were foreign immigrants, unrelated to the Kurus? At any rate, the theory is supported to some extent by their rude, uncourtly manners; practice of polyandry; and the name “Pandu” meaning “pale”, which may perhaps indicate their Mongolian affinities. If the suggestion has any substance, the present text of the Mahabharata gives an altogether garbled version of the actual origins and relations of the chief combatants.

Similarly, it is difficult to accept its testimony regarding their allies. For instance, we learn that the Kuru hosts included the rulers of Pragjyotisa (Assam), Avanti and Daksinapatha, the Cinas, Kiratas, Kambojas, Yavanas, Sakas, Madras, Kaikeyas, Sindhus, Sauviras etc. Apart from the fact that they were not all contemporaneous, it is doubtful whether these distant powers were interested in what was perhaps a local conflagration in Madhyadesa. And surely they could not be called to arms as feudatories, for the nearness of the Kaurava and Pandava capitals itself shows that they did not hold an extensive sway. In short, there are undoubted deviations from historical accuracy in the Mahabharata, but the central theme is authentic, and its characters, whose exploits were first popularised by story-tellers and minstrels, are by no means imaginary.