The central administration consists of the President, the Prime Minister, the Council of Ministers and Secretaries to these offices.

The word secretariat means office of the Secretaries. For the purpose of administration, the Government of India is divided into Ministry and Departments which constitute the Central Secretariat. For efficient discharge of business allotted to a Ministry, it is divided into various Departments, Wings, Divisions, Branches and Sections. 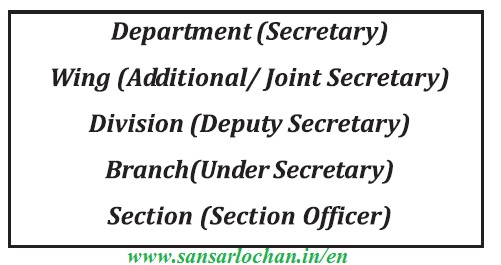 A minister remains in power for a period of five years. Generally secretary belongs to permanent civil service and remains in office till he retires. It has been observed that the portfolios of ministers change frequently, particularly with every change of leadership or through occasional reshuffles in the council of ministers. The Secretaries on the other hand, enjoy longer tenure as the administrative head of his Ministry.

Depending upon the volume of work in a Ministry, one or more wings can be set up. An additional secretary and joint secretary is in charge of the wing. He is given independent charge, subject to overall responsibility of secretary.

A wing of the Ministry is then divided into divisions for the sake of efficient and expeditious disposal of business allotted to the Ministry. Two branches ordinarily constitute a division which is normally under the charge of a Deputy Secretary.

A branch normally consists of two Sections and is under the charge of an Under Secretary. He is also called as Branch Officer.

Headed by a Section Officer, a section consists of Assistants, and Upper Division and Lower Division Clerks. The initial handling of cases, noting and drafting, is carried by these staff-members.