Chinese cities were a wonder to foreign visitors. Chang’an had more than one million citizens, yet its cleanliness was starling. There were public baths, and hot water was sold in the streets for washing. Toilets facilities in houses were fairly basic, emptying into cesspools, but waste was collected in carts every evening and taken away. The Chinese habit of using toilet paper came as another surprise to visitors. 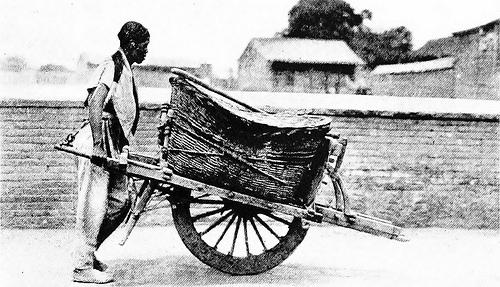 The wheelbarrow was a Chinese invention and was used by farmers, market traders, and construction workers. This typical barrow has a central wheel not unlike today’s garden barrows.

The Tang and Sung dynasties

The second Sui emperor, Yang Di, was less prudent than Yang Chien. He taxed people heavily to pay for expensive projects, such as rebuilding the Grand Canal and constructing new imperial places and gardens. Discontent flared into revolt. The emperor was killed and a government official named Li Yuan seized power. He founded the Tang dynasty, which lasted for almost 300 years until it was overthrown by the warlord Chu Wen in AD 907.

For a time China was then split into five dynasties and smaller kingdoms, but in AD 960, the Sung dynasty reunited China and made their capital at Kaifeng. The Sung ruled until AD 1279. They were not as strong as the Tang emperors, but they were more technologically advanced. 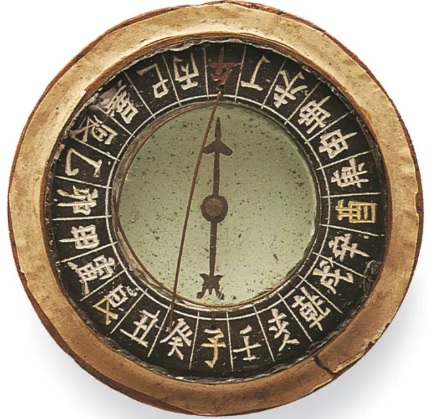 By AD 1100 the Chinese were using magnetic compass such as this one, with an iron needle and marked points.

The Tang and Sung periods were good times for China. Painters and poets flourished China was united and prosperous. Painters created beautiful calm landscapes , to show the harmony between people and nature. Poets such as Wang Wei, Li Po and Tu Fu wrote about love and war. Potters made delicate pottery, known as porcelain. The Chinese were the first people to print books, using wood blocks.

Trade in China moved by road and along the impressive canals. The Grand Canal connected the main rivers. Most canals were dug in level ground, so avoiding the need for locks, but in the AD 900s Chinese engineers developed the pound-lock, with gates at either end, which could be emptied or flooded to let boats pass through. 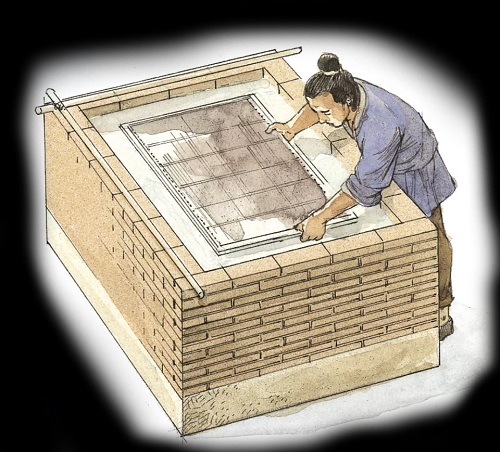 A paper-maker at work, spreading wet pulp over a mesh frame. The invention of paper was announced by the director of Chinese imperial workshops in AD 105. The Chinese began to use paper money under Sung rule.

The Chinese were fascinated by machines. They invented the wheelbarrow for carrying loads, and even fitted  barrows with sails to make pushing easier. They used waterwheels to mill rice and drive hammers to beat meat into shape. They knew about the magnetic compass, and their ships had stern rudders (still unknown in the West). Chinese soldiers had the best crossbows in the world, and also a range of smoke and fire weapons. Most alarming of all to an enemy were rockets, which began to be used in the 900s, and “fireguns” – bamboo tubes with gunpowder.

Hope you liked our this article which gave you a brief idea about Chinese dynasties and the timeline of rulers or emperors.