Basavanna, Basava or Basaveshwara was the founder of lingayat sect which focusses on Shiva Bhakti. He was a minister during the rule of the 12th-century Kalachuri king Bijjala I in Karnataka. He was a social reformer. Let’s know about his early life, his social works and his shakti vishishtadvaita philosophy.

Basava (1132-1168 CE) was born in 1132 CE at Bagewadi. Madiraja and Madalambike were his parents. He studied veda, grammar and logic at an young age. At the age of 8, he removed his sacred thread saying that he had Linga deeksha at his birth and so there was no need for Upanayana. Then he went to Kudalasangama where he studied under Jatavedamuni.

Kalachuri king Bijjala appointed Basava as Karanika. Basaveshwara married Neelambike and Gangambike. Without getting influenced by power, wealth and worldly life, he carried out responsibilities through honest service. He became the Prime Minister after the death of Siddarasa. He took a vow to remove caste system, blind beliefs, plurality of God and idol worship, animal sacrifices that were practiced in the society of those days. He toured the state and created awareness among the people. He made it clear that caste system does not have the base of Dharmashastra. He encouraged interdining and gave Linga deeksha to untouchable Nagadeva and accepted his hospitality. Encouraging inter caste marriage he performed the marriage of Brahmin Madhuviah’s daughter with Harijan Haralaiah’s son. Both were devotees of Shiva. Preventing animal sacrifices he said “Dayave Dharmada Moolavaiah” (comparison is the base of religion).

Basava propounded the bath of devotion for salvation. To achieve salvation there is no discrimination between castes and gender. He criticized caste system. A man’s status is decided by his competency and not by his caste, and all are equal before Shiva. He condemned idol worship, holy bath and worship of stones and trees.

Orthodox people looking at the religious works of Basaveshwara gave a complaint to Bijjala that he was using the money from the treasury and that he was spoiling Hinduism. To appease the orthodox people, Bijjala gave death sentence to Madhuvaiah and Haralaiah. Also he blinded the newly wed couple. Upset by this Basava gave up his post as minister and went to Kudalasangama. This led to a revolt at Kalyana. In this revolt Bijjala was murdered. Basava attained oneness in God in 1168 CE at Kudalasangama. 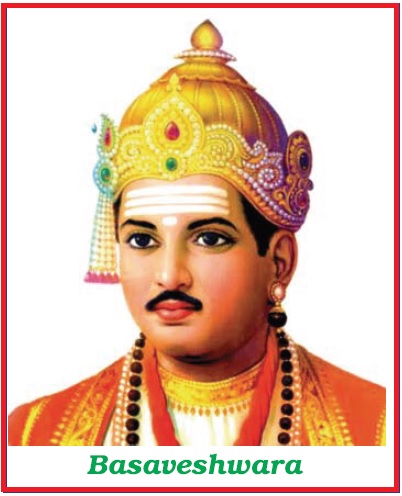 Basava propounded shakti vishishtadvaita philosophy. He gave prominence to the worship of Linga. Also he gave opportunity for all to wear Ishtalinga irrespective of caste and gender. Thus those who wore linga came to be called lingayata. Religion gives opportunity for the worship of Shiva and in this, Linga (God) and Anga (individual soul) are two divisions. Moksha is to attain oneness with linga. The merger of Shiva (purusha) with Shakti (prakruti) from the basis of Basava’s philosophy. Purusha and Prakruti are incomplete without the merger of each other. This is called “Shakti Vishishtadvaita Philosophy“. It is very necessary for Anga to worship Linga to attain Salvation. Ashtavarana (eight) principle has to be followed by Lingayata which are taught at the time of “deeksha”, they are :

Vachanas are a unique form of Kannada literature and have enriched Kannada literature. They created awareness among the people and laid the foundation for social reforms. They contain virtues and moral values. Basava has composed nearly 5000 vachanas and Kudalasangama Deva was his pen name.

2 Comments on “Life of Basava and Shakti Vishishtadvaita Philosophy”