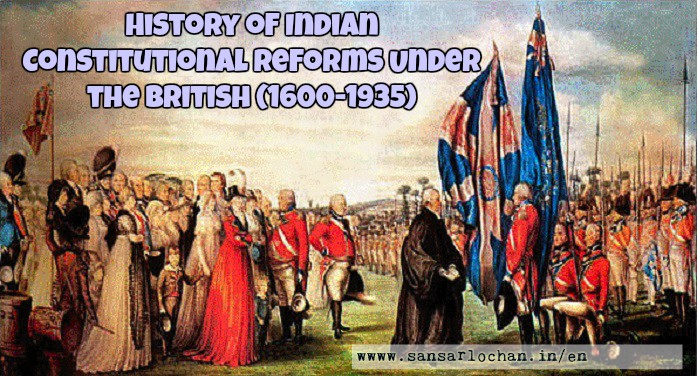 Since the days of East India Company, the outlines of administrative and political reforms began to appear. At the outset, these reforms were confined to the powers and jurisdiction of the Company. Subsequently, as the centre of power shifted to the Crown, the reforms attained a wider perspective and gradually influenced the entire area of British rule. The first such reform was in the form of Elizabeth’s Charter which issued in 1600. The chain of such constitutional reforms culminated in the shape of the 1935 Act which is alleged to be the bedrock of our instant Constitution of India. A brief description of the whole sequence is narrated below.

This charter delegated certain sovereign powers to the Governor and Company of Merchants of London trading with the East Indies. On 31st December 1600, the English merchants  obtained from Queen Elizabeth a Charter to have the sole monopoly of trade with India, and this led to the establishment of the East India company.

Conferred upon the Company powers of erecting fortifications, coining money, making peace and war, thereby transforming it from a commercial into a political body.

The right of collecting revenue and administering justice in Bengal, Bihar and Orissa was conferred by Emperor Shah Alam. Thus the company assumed responsibility for the discharge of governmental functions for the Indian subjects.

a) the management of Company’s Indian possessions by a Governor-General and four Councillors stationed at Fort William (Bengal). These were to be appointed by Royal Charter.

b) the establishment of a Supreme Court of Judicature at Fort William, Judges of which were to be appointed by Royal Charter.

c) the Directorate of the East India Company was left in charge of commercial and financial matters only.

The Governor at Fort William was raised to the status of the Governor-General, the Governors of Bombay and Madras were made subordinate to him. It was a distinct move for the unification of the country. Bengal was to be administered by a Governor-General-in-Council. Unfortunately, the provisions of this Act reduced him to the position of non-entity.

Created a Board of Control at London to superintend, direct, and control all acts, operations and concerns relating to Company’s possessions and established the control of Ministers directly responsible to Parliament.

The Company gradually lost monopoly of trade. The Governors and Councils at Madras and Bombay were made definitely subordinate to the Governor-General of Council. The Charter Act of 1833 provided for the association of Indians in the administration of the territories. A lakh of rupees was set apart for education etc.

Gave death blow to the Company by transferring the control to the British Crown directly. The changes were –

a) Abolition of Court of Directors

b) Transference of the Government, territories and revenues to the Crown

c) Provided for the appointment of an additional Secretary of State for India and a Council of India to help him.

The act was followed by Queen Victoria’s Proclamation which assured the subjects about the policy of racial indiscrimination.

Indian Council Act, 1861 created local legislatures in Bombay, Bengal and Madras. An additional member was added to the Executive Council and the Legislative Council was enlarged by providing for the appointment of additional members both European and Indian.  This Act also empowered the Governor-General to allocate specified subjects to individual members of the Executive Council. This led to the establishment of separate Departments, and so the Portfolio System was introduced.

Advocated the extension of local self-government as a means of political education and envisaged the establishment of local boards.

Indian Council Act, 1892 increased the size of the Councils, widened scope for interpellations and provided for the inclusion of non-official members as representatives of various bodies. It enlarged both the Imperial and local Legislative Councils and increased the proportion of non-official and Indian members. The members were given the right of asking questions but not supplementary ones; the principle of election was conceded. The Budget was to be presented and discussed but it could not be voted upon.

It increased the number of members of the Imperial Legislative Council from 21 to 60 and more than doubled the members of the Provincial Legislative Councils. The Minto-Marley Reforms introduced the principle of communal representation for Muslims which formed the basis of two nation theory, later advocated by Jinah. In reality this vicious system of communal electorates led to the establishment of Pakistan in 1947.

It introduced the following changes:-

a) Inclusion of an Indian in the Viceroy’s Executive Council

b) Extended the size and scope of Provincial Council

c) On all Councils, excepting the Governor General’s, non-officials came to occupy a majority

d) Members were both elected indirectly and nominated by the Governors. Communal electorates were introduced.

e) Powers to discuss matters of general and public importance, subject to the Governor’s veto

The Indian people and the Princes rendered every assistance to the British during the World War I and made contributions both in men and material for the successful prosecution of the war. E.S. Montague, the Secretary of State, announced the British policy with regard to India on August 20, 1917. He laid stress on the following two main principles:-

a) the increasing association of Indians in every branch of the administration.

b) Government of India, as an integral part of the British Empire. This announcement led to the Reforms of 1919.

The main feature of this Act was the introduction of Dyarchy or the dual administration in the Provincial Executive, i.e., a number of subjects which the Provinces were empowered to administer were transferred to the Ministers responsible to the Provincial Legislative Councils (called Transferred subjects) and rest were left in charge of the members of the Executive Council who were not responsible to the Provincial Legislature (these subjects were called Reserved subjects). Besides, the Legislative Assemblies did not enjoy full legislative, financial and administrative powers in many respects. The dyarchical system of Government, which continued to be in force from 1921 to 1937 in the provinces was an utter failure.

A bi-cameral legislature was set up at the Centre, the lower House (Central Legislative Assembly) was to consist of 140 members, and the Upper House (Council of States) was to be composed of 60 members.

Montagu-Chelmsford Reforms introduced more changes in the administration of India. They may be broadly summarized as under :-

a) Bicameral legislature at the Centre.

b) The limitation of number of the members of the Governor-General’s Executive Council removed.

c) Dyarchy introduced in the Provinces, whereby a section of subjects, called “Transferred Subjects”, were entrusted to the charge of the Governors acting with Ministers elected by members of Provincial Legislatures and responsible to these bodies. “Reserved Subjects” continued to be controlled by the Governor and his Executive Council.  The Transferred Subjects included Local Self-Government, Irrigation, Forests, Land Revenue, Medical Administration, Public Health, Education, Public Works, Agriculture, Fisheries, Industries, Co-operative Societies, Registration and Excise.

d) Elected majorities, both at the Centre and in the Provinces; Principle of direct elections with communal electorates subject to property qualifications.

e) The Councils were given large powers of legislation, advice and interpellations subject to the sanction of the Governor-General or Governor, as the case may be.

f) The supremacy of the Secretary of State in Council continued unabated, but provision was made for devolution of powers by means of rules.

g) The Preamble to the Act affirmed the principle announced by Mr. Montagu in his historic announcement of 20th August, 1917.

h) The Act provided for the appointment of a Commission at the end of ten years to report upon the working of the Reforms and suggest means for further progress.

i) The Act created a High Commission of India (in England) to represent the Government of India as far as Indian trade and commerce is concerned. The Commission also helped the Indian students abroad.

The India Bill recieved Royal assent on August 2, 1935. Act consists of 478 clauses and 16 Schedules, occupying 455 printed pages and is the longest Act in the history of Parliament. The passage of the Reform Act has completely re-orientated a political controversy that has harassed India for the past 20 years. It is not possible to give here more than a synopsis of the provisions of this great measure.

The Act sought to introduce Provincial Autonomy, and establish an All India Federation. Dyarchy was to be abolished and all Provincial subjects were to be administered by the Ministers responsible to the legislature. A federation was to be established consisting of 11 British Indian Provinces, and those Indian States which agreed to join the Federation. Dyarchy was to be established at the Centre, the Departments of Defence, External Affairs and the Ecclesiastical Affairs were to be administered by the Governor-General. All other departments were to be transferred to a Council of Ministers responsible to legislature. Even here, the Governor-General had “Special responsibilities”, and he could over-ride his Ministers. Burma was separated from India. The Act created two  new provinces Orissa and Sind.