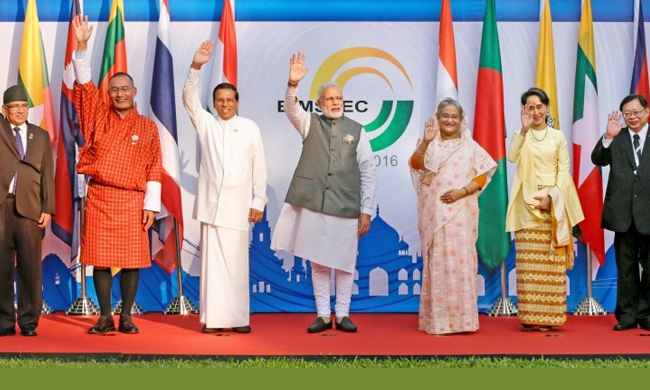 The Bay of Bengal Initiative for Multi-Sectoral Technical and Economic Cooperation (BIMSTEC) is an international organisation of seven countries (Bangladesh, India, Myanmar, Sri Lanka, Thailand, Bhutan and Nepal) of South-Asia and South-East Asia situated near the Bay of Bengal. This organisation was established on 6th June, 1997 in Bangkok. Initially, Mayanmar was not the member of this group and was just an observer. Likewise, Nepal and Bhutan also were in the beginning observers only but later on these countries also became the members of BIMSTEC. It is headquarted in Dhaka, Bangladesh.  As the name itself suggests, this multi-national organisation aims at technological and economic cooperation among South-Asian and South-East Asian countries situated along the coast of the Bay of Bengal. The areas of corporation identified for such purpose are: Commerce, Agriculture, Fisheries, Investment, Tourism, Technology, Human resource development, Transport and Communications, Textiles, Leather etc. However this list is not final. From the time to time some other areas of corporation are added to the BIMSTEC agenda e.g. public health, poverty alleviation, counter-terrorism and transnational crime, environment and natural disaster management, culture, climate change and people to people contact.

For the chairmanship of the BIMSTEC, alphabetical order is followed. According to this order, Bangladesh became the first chairman of the organisation, followed by India, Myanmar, Sri Lanka and so on.  Sumith Nakandala of Sri Lanka became the first Secretary General of BIMSTEC on 4th March, 2014.

In the eighth BRICS meeting held 15-16 October, 2016 at Goa, India PM Narendra Modi invited the representatives of BIMSTEC as well. Through this invite Modi is looking at building cooperation between the two multi-national bodies in such as areas as technology, investment, energy and travel and connectivity. The meeting of BIMSTEC leaders with BRICS leaders such as Putin, Xi and others provided an opportunity to exchange views on important economics subjects common between the two groups.