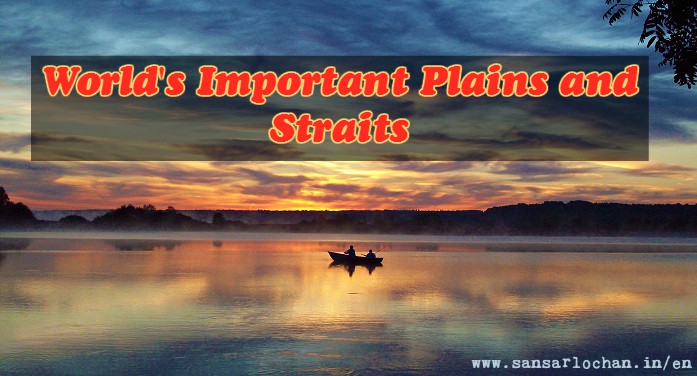 In physical Geography, we study a number of natural forms. Of these forms here we will have a look at two very important once vis. Plains and Straits. Plains are those land masses that are relatively flat and are generally products of rivers. They are formed chiefly through the sediments associated with a certain river. On the other hand, straits are a bodies of water which separate two or more pieces of land mass. The number of both plains and straits is fairly large. However below is given a representative list of such natural forms scattered over the entire world.

It lies in the south of Himalayas stretching from the Sulaiman mountains to the Gargo and Lushai Hills. It is 100 to 300 miles wide. It is a flat and alluvial plain with deep and fertile soil. There is a net-work of roads and railways with the best system of irrigation canals in the world. It is one of the most thickly populated parts of the world.

The vast plains of the Orinoco basin. In the dry season they are a desert but in the rainy season there is an abundance of grass.

The most fertile parts of Italy watered by the River Po. They grow corns, fruits and mulberry plants over which silkworm is reared.

The wide, treeless, grass-covered plains of the La Plata river system, which are the most extensive pasture lands in the world.

The vast impenetrable forests of the Amazon Valley. It is a region of great heat and heavy rainfall and has the largest forest in the world.

The vast treeless plains of Russia extending from the Caspian Sea eastwards. They are very hot in summer and very cold in winter and have no rainfall.

The swampy plains near the Poles in the extreme north of America, Asia and Europe. They remain frozen for about nine months. Fishing and hunting are chief occupations of the people.

Other important plains are Pampas in Brazil, Veldt in South Africa, Downs in Australia, Prairies in North America, Savannah in Northern Africa and Parklands in East Africa.

One Comment on “World’s Important Plains and Straits – General Knowledge”