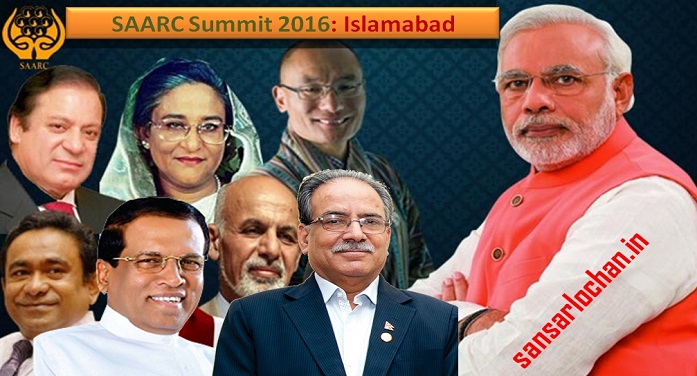 SAARC Summit 2016 was going to be held at Islamabad, Pakistan in the month of November. Afghanistan, Bangladesh, Bhutan, India, Maldives, Nepal, Pakistan, and Sri Lanka are SAARC members. Following the Uri attack, India decided not to participate in SAARC summit. Taking clue from India’s stance, 3 SAARC nations, namely, Bangladesh, Afghanistan and Bhutan have also declared not to participate in the summit.

2. It is hardquartered at Kathmandu, Nepal.

3. SAARC members are — (I already mentioned in the first paragraph)

4. This organisation was formed on 8 December 1985 to boost diplomatic, economic and political relations between South Asian countries and to maintain deeper integration for peace and prosperity.

5. Afghanistan was the last and eighth country to join SAARC. It joined on 13 November, 2005 in 14th SAARC summit.

SAARC summit 2016 was the 19th summit. The 18th Summit was held in Nepal. Countries like Bangladesh and Afghanistan are saying —

The aim to form SAARC was to make a strong commitment to regional cooperation and connectivity between South Asian countries. So the current and next summits will continue only if there is a congenial atmosphere among SAARC nations. After Uri attack India is disturbed so we also cannot attend this year’s summit.

Some important facts you should know

SAARC is an important regional cooperation body. This was formed to facilitate economic and cultural interactions between the member countries. Peace is the most essential condition for promoting economic and cultural interests. Due to Pakistan’s involvement in terrorist attacks on Indian territory, regional peace is at present in jeopardy. Hence, the decision taken by India and some other member countries is justified and appropriate.