Among revolts during the British period, tribal revolts were most significant. The tribals mostly lived in hills and forests. They subsisted through shifting agriculture, agriculture labour and labour in distant mines, factories etc. 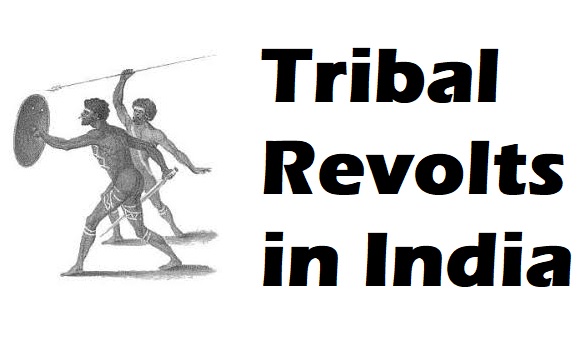 Commercialisation of agriculture, increasing control over forests for revenue purposes and utilization of forest wealth for the benefit of urban people resulted in penetration of urban people as government officers, traders, contractors, money lenders, etc. into tribal areas during the period of the British rule. The Christian missionaries too remained active in these areas. Most of them, in their own way, exploited the innocent people living there. It created resentment among them which sometimes led to violent outbursts by them. The violent outbursts occurred at many places throughout the British rule. Some of them were as follows:

In 1829, the Khasis, a tribe inhabiting the hilly region in the north-west on the border of Assam revolted against the British. The British desired to construct a road which had to pass through the territory of Khasi chiefs. The Khasis did not like it. And, when the British started constructing the road and forced Khasis to work as labour, nearly thirty Khasi chiefs decided for turning out the British from hills as well as from plains of Assam.

Bar-Manik, the chief of Molim tribe became their leader. He was supported by other chiefs particularly the chief of Nunklows, Tirut Singh. The tribals revolted in May 1829 and fought against the British for nearly four years. The British suppressed the revolt brutally, put up an economic blockade to the territory of Khasis and burnt Khasi villages.

By the end of 1832, the Khasi chiefs surrendered to the British and the revolt was finished. In 1830 and again in 1839, the hill-tribe, Singhos revolted against the British but with no result.

Another tribe, Kapaschor Akas revolted against the British in 1835 under Tagi Raja and fought till 1842 but were defeated.

The Nagas in the north-west revolted in 1849. They continued fighting till 1851 but were suppressed.

The Kukis, inhabiting the hill-region of Manipur and Tripura attacked British territory in 1829, 1844, 1849 but were finally defeated in 1850.

The Khonds, inhabiting the territory of Khondmals on the border of Orissa feared that the British would occupy their lands. Therefore, they revolted in 1846. They fought against the British for nearly three years but were finally defeated. They revolted again in 1855 and then in 1914 also but had to submit finally.

The Santhals occupied the territory on the border of Bihar adjacent to Bengal. They were exploited by money-lenders (Sahukars) from urban areas of Bengal and Bihar who had settled themselves in their territory. The Santhals expected help from the government but when that did not happen they felt aggrieved against the government as well. Two brothers Sindhu and Kanhu became their leaders who tried to turn out the British from the territory of Santhals in 1855-56. First they succeeded and the British as well as the exploiting Sahukars were turned out of the Santhals’ lerritory. But by February 1856, the revolt was suppressed brutally and inhuman atrocities were perpetrated on Santhals. In 1917, the Santhals again revolted but were suppressed.

In 1882, the Kacha Nagas of Cachar revolted and, in 1917, the Kukis revolted in Manipur. But both revolts were suppressed.

In Chota Nagpur, the Kolarian tribe was ruled several chiefs. They did not like the encroachment on their territory by the British. One of them, the Raja of Porahat opposed the British encroachment but was forced to surrender and pay annual tribute. However, his subjects, the Hos resisted the British for some time but submitted in 1827.

The revolt covered a large area. Military operations were taken against it and it was suppressed by March 1832. In 1832, Ganga Narayana, a claimant to the Barabhuma estate rose in rebellion and the British had to leave the estate. But by the end of the year, the revolt was suppressed.

In 1899-1900, another revolt occurred in the region south of Ranchi. It was led by Birsa Munda. The problem before the Mundas was the same. The money-lenders and merchants from the plains occupied the lands of the Mundas, imposed forced labour on them and exploited them in several ways. The Mundas sent a legal petition to the government against their oppressors. But the government did nothing to help them. Then came Birsa Munda on the scene who claimed that he had a vision of God and he would eliminate all grievances of the Mundas. In 1897, he was imprisoned for two years. After returning from the prison, he instigated the Mundas to eliminate Sahukars, landlords and government officials forcefully. The Mundas called him Bhagwana.

In 1899, the Mundas started attaching landlords, Christian missionaries and government officials. But by 1900, the Mundas were defeated, Birsa was captured and imprisoned and the revolt was suppressed. Birsa died in prison.

However, the revolt brought some useful result. Land-settlement efforts were made between 1902-1910 and finally the Chota Nagpur Tenancy Act was passed in 1908. It provided some relief to peasants there.

Revolt of the Sanyasis in Bengal

Revolts occurred in several other parts of India as well before the Revolt of 1857 and after it. The first revolt against British policies was the revolt of the Sanyasis in Bengal during the period of governorship of Warren Hastings. Warren Hastings could suppress the revolt only after prolonged military actions against the Sanyasis. A semi-religious sect, Pagal Panthis revolted in northern districts of Bengal in 1825, 1830’s and 1940’s but with no result.

The Bhils in Rajasthan also tried to establish their Raj in 1913. Besides, several other revolts occurred at different places in India.

Thus, many tribal and other revolts occurred during the rule of the British. The primary causes of these revolts were encroachment on the lands of the tribals by the people from plains, their exploitation by them, no help to the tribals by the government, rather, support to exploiters by it and encroachment by the government or by outsiders on the cultural and economic life of tribals. None of the revolts succeeded. All of them were brutally suppressed. But it certainly exposed the nature of British government which was based on brutality and support to privileged classes against poor and exploited ones.