Hope before reading this article about the treaty of Salbai, you have read about the First Maratha war because it is a sequence of story and you will not able to know what was the background of this treaty if you do not know anything about the first Maratha war.

Raghunath Rao fled away for his safety and found shelter with the British at Surat. There he signed the treaty of Surat with English government at Bombay on March 7, 1775. By this treaty, the British agreed to provide military assistance to Raghunath Rao and help in aking the Peshawa in return for their expenses. Besides, Raghunath Rao agreed to cede the islands of Salsette and Bassein to the British and promised that the Marathas would not attack the territories of Karnataka and Bengal. This treaty resulted in the beginning of the war against the Marathas.

The English started with success and defeated an army of the Marathas at Arra on May 18, 1775. The English Council at Calcutta, however, did not like this adventure of the Bombay government. Therefore, the Calcutta Council deputed Colonel Upton to negotiate peace terms with the Marathas at Poona. After three months of hard discussions, the treaty of Purandhar was signed between the two parties on March 1, 1776. It was agreed that the English and the Marathas would maintain peace at all fronts and the English would retain only Salsette and, in return, would give up the cause of Raghunath Rao who would be given a monthly pension by the Peshwa.

But the English government at Bombay was in no mood to fulfil the terms of the treaty and continued to provide shelter to Raghunath Rao. In the meantime, the court of Directors rejected the treaty of Purandhar and insisted on retaining Bassein. Warren Hastings, the governor general, was also persuaded by the Bombay government to reject the treaty of Purandhar. It again revived the hostilities. Hastings despatched a force to attack Poona in 1778. The English were hopeful of securing more advantages as the Marathas were in serious trouble at that time. But Nana Fadnavis and Mahadaji Sindhia belied their expectations. The English army was defeated and the commander was forced to sign the Convention of Wadgaon. It was agreed that the English would return all that territory which they had captured since 1773; the English would abandon the cause of Raghunath Rao alias Raghoba; and, the English army from Bengal would be ordered to return. Warren Hastings, however, refused to accept the terms of the Convention of Wadgaon.

He dispatched a strong force under Goddard from Bengal. This army captured Ahmadabad in February 1780. The English also occupied Bassein in December 1780. But, when Goddard proceeded towards Poona, he was defeated in a battle and forced to retreat. Warren Hastings despatched another English army under Colonel Popham from Bengal. It captured the fort of Gwalior in August, 1780 and defeated Sindhia on February 16, 1781. These successes saved the English prestige and the Sindhia became inclined towards making peace. The Marathas received diplomatic setback also at that time. They had made a common cause with Haider Ali and the Nizam of Hyderabad against the English. Haider Ali attacked Karnataka as planned but the Nizam and the Bhonsle, who had agreed to attack Bengal, were purchased by return of Guntur and payment of money respectively. This saved the British from serious trouble. 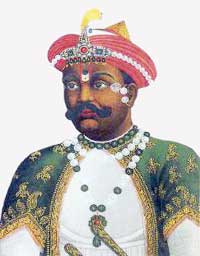 Mahadaji Sindhia made an agreement with the English in October 1781 by which he agreed to negotiate with Poona Council for a treaty with the English. The negotiations started in early 1782 and the treaty of Salbai was signed between the English and the Marathas on May 17, 1782. Its terms were as follows:-

Dodwell remarked: “The treaty of Salbai formed a turning point in the history of English supremacy in India.” It is, of course, an exaggeration. The English gained nothing more than Salsette. They were put to extreme financial distress. They were able to save themselves from a “desperate period of distress” as Warren Hastings put it. Of course, it was a bold attempt of the English to gain ascendancy in India. But, the Marathas successfully resisted it. Yet, the results of the war were, certainly, in favour of the English. They retained Salsette. Besides, it was proved that the native rules could not work in union and there were divisions in the Maratha camp as well. It emboldened the British. They had fought successfully against the strongest native power in India. Therefore, the treaty was certainly “an important landmark” in the history of India.

Discuss critically the provisions and the importance of the treaty of Salbai.