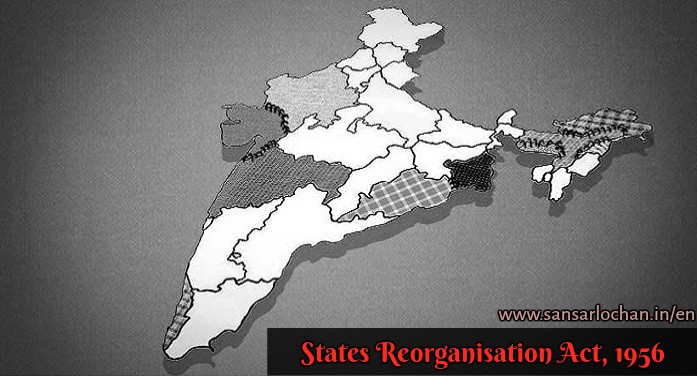 Due to accession of Princely States and due to the then haphazard forms of British India territories, need was felt later to re-organise the entire country in a more reasonable and popularly acceptable states and union territories. In order to address this need, a State Reorganisation Committee was constituted in December 1953, with Justice Fazl Ali, K.M. Panikkar and Hridayanath Kunzru as members to examine the issue and recommend the principles for re-organization keeping in view the objectivity and indiscrimination. The Commission reported in 1955. The recommendations were discussed and debated and ultimately the state reorganisation bill 1956 was introduced in parliament in April 1956. The States Reorganisation Act was passed in November 1956.

Re-arrangement of Indian states was the need of the hour. There was a demand of re-organising the States on linguistic, cultural and other grounds. The Govt. realized the rationale behind such demands. To use the words used in the States Reorganisation Act, “The states of India, as they exist today have been formed largely as a result of historical accidents and circumstances and hence there was a demand for the reorganisation of the component units of the Indian Union on a more rational basis, after taking into account, not only the growing importance of regional languages but also financial and administrative considerations.”

The main features of States Reorganisation Act, 1956 are :

After 1956, the acceptance of the principle of linguistic states did not mean that all states immediately became linguistic. There were exceptions as well. There was “bilingual” Bombay state, consisting of Gujarati and Marathi speaking people. After a popular agitation, the states of Maharashtra and Gujarat were created in 1960.

Another example is Punjab where there were two linguistic groups: Hindi speaking and Punjabi speaking. The Punjabi speaking people demanded a separate state. The SRC had refused to accept the demand on the ground that it would not solve either the language or communal problem of Punjab. After long powerful movements, finally in 1966 Punjab was divided into Punjab and Haryana.

Why urge for re-organisation of states?

One Comment on “States Reorganisation Act, 1956 : Rationale and Features”