While the in the first Carnatic war two European powers fought against each other for supremacy in South India, the second Carnatic war was fought between two local rulers each supported by a foreign power. The war was triggered by a succession struggle in Hyderabad. 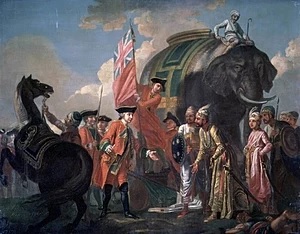 The cause of the second Carnatic War was the interference of the English and the French in politics of the native rulers with a view to enhancing their political power and area of influence. Asaf Jah, Nizam-ul-mulk of Hyderabad, died in May 1748. The throne of Hyderabad was contested between Nasir Jang, the second son of the Nizam, and Muzaffar Jang, his grandson. Muzaffar Jang went to the Marathas to seek their support. There he met Chanda Sahib, the son of Dost Ali, the former ruler of Karnataka. Chanda Sahib coveted the throne of Karnataka. Both of them made a common cause and approached Dupleix for support. Dupleix obtained the release of Chanda Sahib and Muzaffar Jang in capturing the thrones of Karnataka and Hyderabad respectively. Chanda Sahib attacked Karnataka with the help of Muzaffar Jang and the French. On August 3, 1749, he killed its ruler, Anwar-ud-din in the battle of Ambur, forced his son. Muhammad Ali had to seek shelter in the fort of Trichinopoly and occupied Karnataka.

The English now got alarmed. The success of the plans of Dupleix would have left them helpless against the French in South India. They offered help to Muhammad Ali and Nasir Jang which was accepted by both. Chanda Sahib captured Karnataka but while he wasted his energy in fighting against Tanjore, Nasir Jang attacked Karnataka with the help of the English. He defeated the combined forces of Chanda Sahib and the French. It was a grand success for the English. While Chanda Sahib was forced to retreat to Pondicherry, Muzaffar Jang surrendered himself to his uncle, Nasir Jang. But Dupleix did not lose courage. He conspired against Nasir Jang and won the loyalty of many of his nobles. The French, then, attacked Nasir Jang who was murdered by one of his own nobles in 1750. Muzaffar Jang was declared the Nizam who accepted Chanda Sahib as the Nawab of Karnataka, made Dupleix a Nawab and the French received territories called the “Northern Sarkars” from the new Nizam. Bussy managed the affairs of Hyderabad and kept the French power intact there till his recall by Count de Lally in 1758.

Results of the second war of Karnataka

Thus, the second Carnatic war also remained inconclusive. The English were successful in Karnataka while the French remained influential in Hyderabad.

Discuss the causes and results of the second Carnatic war.