Samudragupta was the greatest king of the Gupta dynasty who ruled for 40 years. He was an ambitious ruler and wanted to be a “Chakravarti” (emperor). Today we will discuss about his military conquests and victories in North and South India as well as victories grabbed by him over forest kingdoms and in border states.

Samudragupta is known for his military conquests and victories. He had to wage many wars in order to establish a vast empire. He followed a policy of expansion and aggression. 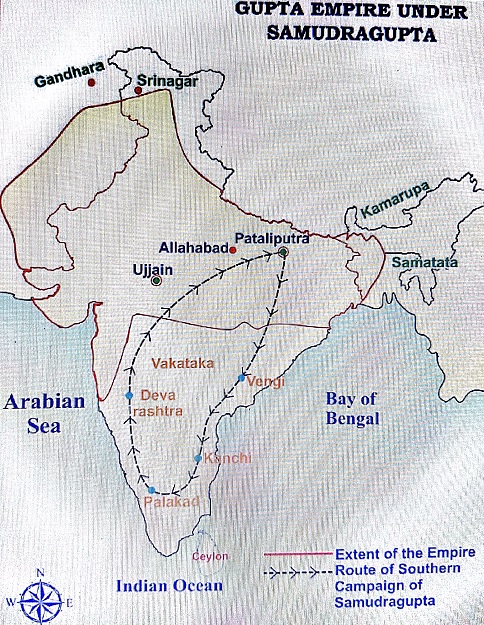 The early years of his regime were spent in subduing the provinces of Gangetic plan called “Aryavarta”. According to Allahabad inscription he defeated 9 kings in his northern campaigns and annexed them into his empire. He called it as “Digvijaya”. The nine kings of Aryavarta defeated by him were Nandin, Balavarman, Nagasena, Rudradeva, Chandravarman, Mathila, Gangapathinaga, Nagadatta and Achyuta.

After firmly consolidating his authority in the north, Samudragupta turned his attention towards the south and he launched an expedition and his army traveled for about 3,000 miles. He defeated the Twelve Kings of South India. But they were reinstated in their respective positions. These kings became his vassals and they accepted to pay tributes. He called this as – “Dharmavijaya“. 12 South Indian kings defeated by Samudragupta were :-

The boundary states conquered by Samudragupta were Kamarupa in Assam, Samatata in Bengal, Kartripura in Punjab and Rohilkhand. After these conquests, Samudragupta performed “Ashwamedha sacrifice” to commemorate his victory. He took the title “Ashwamedha Parakrama”. He issued gold coins with the figure of horse on them. They were on among the eight types of gold coins issued by him. 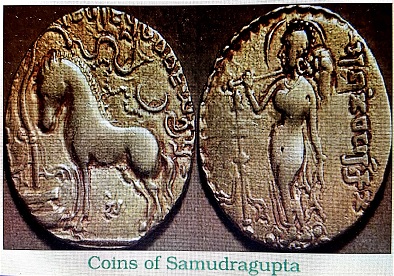 His empire extended from Kashmir in the North to Tamilnadu in the South and Punjab in the west to Bengal in the East. Samudragupta was not only a conqueror but also a musician, poet, scholar and a patron of literature. He had the title “Kaviraja”.

2 Comments on “Samudragupta : His Military Conquests and Victories”