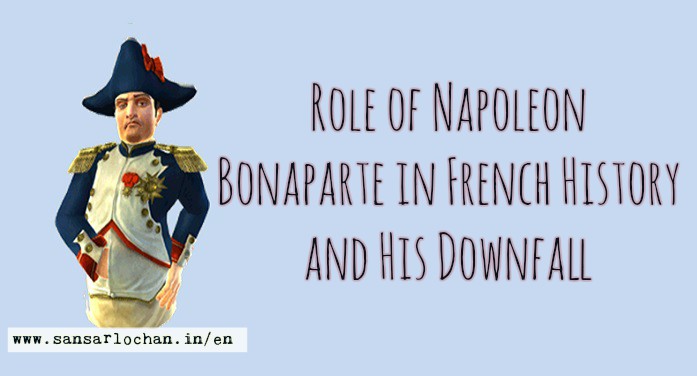 France, in the period from 1789 to 1799 (French Revolution), moved from absolute to limited monarchy, through radical republicanism, to military dictatorship. Napoleon Bonaparte was a native of the French-owned island of Corsica. In 1796, Napoleon successfully commanded the French army fighting the Austrians and Sardinians in northern Italy. Then he led an expedition into Egypt to cripple England’s trade. His fleet was defeated by Nelson at the Battle of the Nile. In the meantime, a second European Coalition had been organised against France. Napoleon Bonaparte established himself at the head of the Government as First Consul or Dictator. Napoleon defeated the Second Coalition and then the Third Coalition. He was master on the continent of Europe. Today we will discuss about his success , reforms and his contributions to France’s progress and finally the reasons behind his downlfall.

In 1804, Napoleon assumed the title of Emperor. Now France stretched from the Baltic to the Adriatic. Napoleon’s brothers occupied the Thrones of Naples, Spain and Westphalia. The Kingdom of Italy, the Grand Duchy of Warsaw and the Confederation of the Rhine were reduced to the status of dependent States. Russia was an ally. Prussia and Austria were humbled and reduced in size. Only England remained strong. Napoleon said of England: “No one has any interest in overturning a Government in which all who have any merit are in their right places”.

Napoleonic reforms completed and consolidated the work of the Revolution. He championed equality and fraternity, though not liberty. Napoleon strictly censored speech and the press wherever his power extended. However he did render a service to religious freedom when he gave to Protestant and Jewish communities a religious status recognized by the State. Napoleon carried much of the idealism of the Revolution into the countries of Europe sweeping out tyrannous medieval laws and customs. In the German and Italian territories which Napoleon controlled, serfdom and feudalism were ended. In Europe were planted the seeds of religious tolerance, popular participation in the Government and equality. But while the magnificent despot went forward with some revolutionary reforms, it was his custom to repress new reform thinking. Napoleon was a paradox.

Napoleon patronized learning. France surpassed the world in mathematics, physics and astronomy. Napoleon established the Bank of France which stabilized the currency by issuing paper money backed by an adequate gold reserve. His Concordat with the Pope (1801) reunited Church and State in France; it lasted until 1905. The Code of Napoleon, whereby obsolete and conflicting laws were eliminated, remains to this day the foundation of the legal system of France. Napoleon must be credited also with administrative and educational reforms. He adopted the plan of a State system of education. This powerful man carried through a far-reaching program of public works. He selected civil and military officials according to merit. He created the Legion of Honor to reward distinguished service to the State.

Napoleon did much to promote the growth of nationalism. He also began the modern warfare of whole nations in arms. His militarism resulted in three million dead, absorption in battle to the hindrance of trade and agriculture and terrible suffering. Furthermore, his towering ambition exposed France to her enemies.

The causes of Napoleon’s downfall were:-

With English help, Spain revolted against Napoleon’s brother. Purssia strengthened herself for a “war of liberation”. Tsar Alexander of Russia, unable to maintain the Continental System, broke with Napoleon. The “Man of Destiny” invaded Russia with an army of half a million men. He escaped a few months later with only a few thousand survivors. Now Napoleon’s enemies knew he could be defeated. A final coalition was organized, and Napoleon was defeated at Leipzig in 1813. Next year he was compelled to surrender at Paris, to abdicate, and to retire to the island of Elba.

In the spring of 1815, Napoleon returned to France and again ruled as Emperor for a Hundred Days. But Napoleon was finally defeated at Waterloo by the English (under Wellington) and the Prussians (under Blucher). He spent the rest of his life in final exile on the island of St. Helena, prostrated to the depths of impotence.