Shahu, son of Shambhuji who was imprisoned by Aurangzeb in 1689, was released by Prince Azam Shah in 1707, with the purpose of dividing the Marathas. Shahu claimed to be the King of the Marathas. Tara Bai, widow of Raja Ram, opposed him as regent of his son Shivaji II and claimed that his son was the rightful claimant to the throne of the Marathas. Shahu, finally succeeded in the contest against her and became the Chhatrapati of the Marathas. Shahu was neither a capable administrator nor a good commander but he had the capacity to choose capable subordinates and command their loyalty. His Peshwas were chosen by him and his first three Peshwas achieved all that which he himself could not achieve. The Marathas reached the zenith of their power during the rule of Shahu and the credit of it goes entirely to his Peshwas. All the three Peshwas of Shahu – Balaji Vishwanath, Baji Rao and Balaji Baji Rao – were competent. They made the Marathas the strongest power in India and themselves the most powerful persons among the Marathas so much so that after the death of Shahu the Peshwas eclipsed the Chhatrapati and assumed all powers of the state to themselves.

Factors that led to the rise of the Peshwas

Several factors led to the rise of the Peshwas. While Chhatrapati Shahu was an ease-loving person, Tari Bai was selfish and narrow-minded. None of them was able to provide peace and security to Maharashtra. The Asht-Pradhan, created by Shivaji too had become ineffective in administration. In these circumstances, the Maratha nobles were contending among themselves for power. The Peshwas of Shahu, found solutions to these problems by their capabilities. They rose to be good diplomats and commanders. They provided the Marathas an ideal – ideal of extending their power and influence towards the North. They rose above all other Maratha chiefs by sheer merit and they also led them to become the foremost power in India.

The first Peshwa of Shahu was Balaji Vishwanath (1713-20 A.D.). He was the Sar Subahdar of Poona and Daulatabad when Shahu entered Maharashtra after his release from imprisonment of the Mughals. 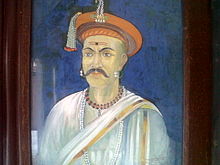 He sided with Shahu and also brought Dhanaji Jadav, the commander-in-chief of Tara Bai, to the rise of Shahu which helped him in capturing the throne of Maharashtra. Vishwanath further helped Shahu in consolidating his power in Maharashtra. Vishwanath was not a good commander and his attempt to improve the finances of the state also failed. But he was an astute diplomat. He convinced most of the Maratha chiefs of the necessity of accepting Shahu as the Chhatrapati of the Marathas and, thus, brought them under his banner. The one creditable achievement of Vishwanath was signing of a treaty between Shahu and the Mughals in 1719. Sayyad Hussain Ali desired to befriend the Marathas with a view to dethroning the Mughal emperor Farrukhsiyar and, therefore, approached Shahu for this purpose. Vishwanath advised Shahu to accept the offer and a treaty was signed between Shahu, on the one hand, and the Mughal emperor on the other. By this treaty, the Marathas received the right of collecting Chauth and Sardeshmukhi from the six subas of the Deccan. In return, the Marathas went to Delhi with Sayyad Hussain Ali and helped Sayyad brothers in deposing emperor Farrukhsiyar from the throne. The right of collecting Chauth and Sardeshmukhi from the six provinces of the Deccan provided the Marathas the opportunity to extend their power in the Deccan while their visit to Delhi made them clear the weakness of the Mughal empire which aroused their ambition to penetrate in the North. Thus, this treaty helped in the rise of the Marathas afterwards.

Vishwanath died in 1720 and Shahu chose his twenty year old-son Baji Rao as his Peshwa. Vishwanath had only consolidated power of Shahu in Maharashtra and prepared the background for the expainsion of the Maratha power. Baji Rao, within twenty years, made the Marathas the strongest power in India. He proved himself an ambitious person and a successful commander. He achieved what Marathas even did not dream of at that time. In fact, he was primarily responsible for the rise of the Maratha power in India and therefore, has been ranked among the great Peshwas.

However, initially, Baji Rao had to face many difficulties. He had to face both internal and external enemies. He had several rivals at the court of Chhatrapati Shahu. Senapati Trimbak Rao was jelous of him. He opposed and conspired against Baji Rao from the very beginning. He refused to share the jagir of Gujarat and Malwa with the Peshwa. However, Baji Rao finally defeated him and killed him at the battle of Dabhai  in April 1731. Baji Rao faced opposition of Pratinidhi Sripat Rao on matters of state-policy. While Sripat Rao desired that the Marathas should concentrate their energy in the Deccan, Baji Rao pleaded that the Marathas should extent their power in North. Baji Rao had realized the weakness of the Mughal empire and attempted to draw maximum advantages out of it.

He said “Let us strike at the trunk of the withering tree, the branches will fall themselves.” Sripat Rao could be convinced of the righteousness of the policy of Baji Rao only after his repeated success against the Nizam of Hyderabad. The Marathas then started raiding northern India and succeeded in capturing the provinces of Gujarat, Malwa and parts of Doab and Bundelkhand. Thus, Baji Rao extended the Maratha empire in northern India and the territories of the Maratha kingdom became most extensive in India.

In Deccan, Baji Rao was stoutly opposed by Nizam-ul-mulk Asaf Jah, the founder ruler of the state of Hyderabad. The Nizam was an astute diplomat and the most experienced military commander among the Mughals. He carved out an independent kingdom for himself in the Deccan. The Marathas alone were capable of challenging him and were the greatest impediments in his ambition and attempt of strengthening and extending the power and territories of his sate. He understood that Baji Rao was his sole opponent among the Marathas. There he always opposed him and encouraged all his enemies. However, Baji Rao repeatedly outmanoeuvred him, defeated him twice and forced him to sign the treaties of Mungi-Shegaon and Durai Sarai in 1728 and 1738 respectively. It was a remarkable success of Baji Rao. Shambhuji II of Kolhapur was a cousin of Chhatrapati Shahu. He opposed Shahu and claimed Chauth and Sardeshmukhi from the six provinces of the Deccan for himself. He was, however, defeated and forced to accept Shahu as his overlord by the treaty of Varna in 1731. Baji Rao also strengthened the hold of the Marathas over Konkan, while the Sidis of Janjira accepted peace with the Marathas. The Angrias, another naval power in the Konkan coast accepted the services of Shahu. Thus, Baji Rao succeeded everywhere. His success was primarly due to the power of the sword. He died of illness in 1740. But prior to it, he had made the Marathas the foremost power in India.

However, the Marathas received a serious setback to their power during this period. The interference of the Marathas in the politics of Delhi brought them in conflict with Ahmad Shah Abdali which, finally, resulted in the third battle of Panipat in January 1761. The Marathas were severely defeated in the battle. It checked their power and ambition. It permitted other native as well as foreign powers to consolidate their strength. Balaji died in 1761. His son, Peshwa Madhav Rao I, of course, consolidated the Maratha power again but the Marathas never regained the status which they enjoyed till 1761.

Therefore, we can say that the first three Peshwas of Shahu made the Marathas the most formidable power in India. The Marathas enjoyed that power and prestige in India which they did not enjoy prior to them or after them.

Trace the rise of the Maratha power under the first three Peshwas.