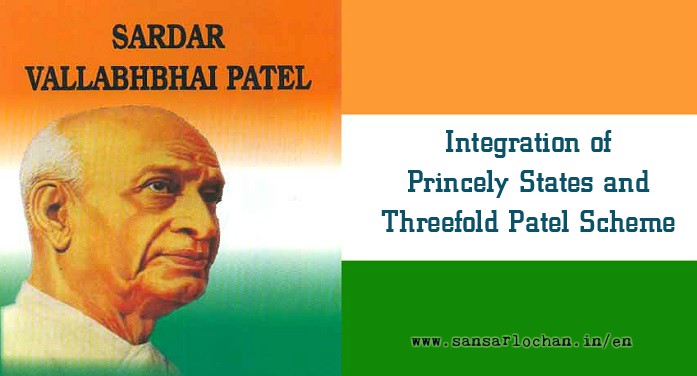 In this article, we are giving a brief note on the integration of Princely States and threefold assimilation strategy adopted by Sardar Vallabh Bhai Patel. Sources we used for this article are Wikipedia and NCERT.

British India consisted of British Indian Provinces and the Princely States. The British Indian provinces were directly under the control of the British Government and thus transferred to India on 15th Aug, 1947. The Princely States accepted British supremacy but enjoyed certain amount of freedom in their internal affairs. This was called paramountcy of the British. The Indian Independence Act of 1947 declared the lapse of paramountcy with effect from 15th August, 1947. With this the Princely States regained their original status, became legally independent and free to join India or Pakistan or to remain independent. Soon the small states realized that it was not possible to maintain independent existence and were willing to accede to India or Pakistan.

Sardar Patel took charge of the Indian States Department and V.P. Menon became his Secretary on 5th July, 1947. They dealt with matters arising between Central Government and the Indian states. All states except a few acceded to Indian union in accordance with an “instrument of accession”, by which they acceded only three subjects; Defense, Foreign Affairs and Communications. The rulers of these states were promised honorable position and were assured of their rights and privileges. Of the states situated within the boundaries of Dominion of India, about 565 states excepting Junagadh, Hyderabad, Kashmir and a few had acceded before the independence itself.

The process of integration was threefold and known as “Patel Scheme”. There were following provisions under Patel Scheme : –