From 1885 to 1905 the Indian National Congress was led by Dadabhai Naoroji, Pherozshah Mehta, Badruddin Tyabji, Anandacharalu, Surendranath Banerjee, Gopal Krishna Gokhle etc. They expressed loyalty to the British and believed in the British benevolence. They intended to pressurize the British Government through Prayers, Petitions and Protests. They organized public meetings, submitted memorandums to the British Government and sent delegations to London. Dadabhai Naoroji, (popular as “the Grand Old Man of India”) established the East India Association in 1866. This association took up the Indian issues at London and attempted to influence the British Public and British Legislators to enact policies and laws favoring the Indians. All the activities of the leaders were on a moderate approach and hence were called “Moderates” the period as the “Period of the Moderates”. The British were hostile towards the Congress since its establishment and they developed a stern attitude towards the Moderates. They called the Congress as a “Factory of Sedition” and the leaders as “Seditious Brahmins” and “Disloyal Babus”.

The first stage though did not bring about any drastic change in the political scenario it represented the progressive forces of the time coming together. It was a time of National awakening with a common cause. The Moderates exposed the exploitative character of the colonial rule and policies of the British. They were able to underline that the duty of the government was to consider the interests of the Indians. The establishment of the Indian National Congress and the ascendancy of the Moderate leadership laid the foundation for the emergence of Indian against the colonial rule of the British.

The period between 1905 and 1920 is known as the period of the extremists. The extremists were radical and militant in their approach in contrast to the Moderates. Hence they were called “Extremists” or “Radical Nationalists”. They considered the British to be “Foreign Invaders”, who were to be driven away by any means possible. The important leaders of the extremists were Bal Gangadhar Tilak, Bipin Chandra Pal and Lala Lajpat Rai. The Trio were popular as “Lal-Bal-Pal”. 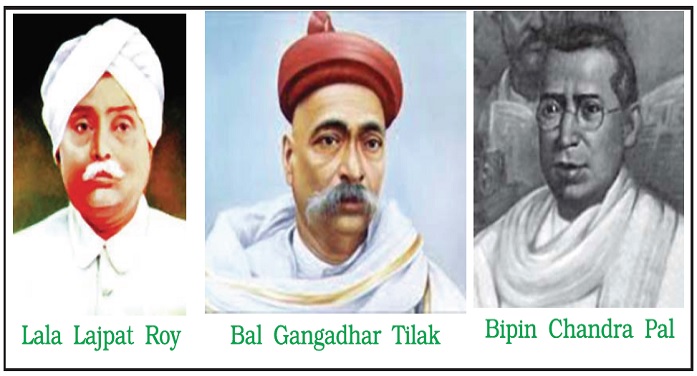