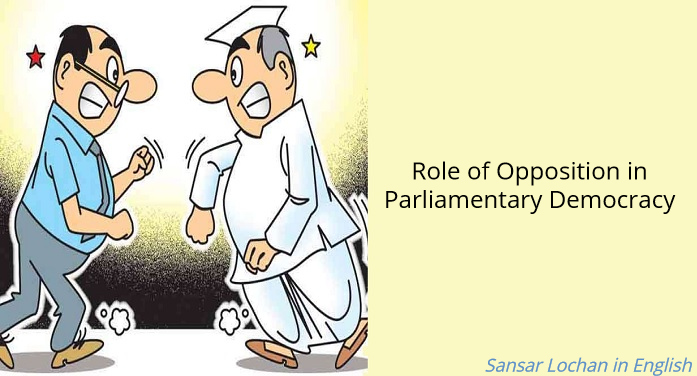 In a democracy such as India the ruling parties or coalitions often do not represent absolute majority of voters and this means that a large number of voters have reposed trust in what constitutes the opposition upon the completion of election process. Thus, the onus of aggregating and articulating the view of people is equally a responsibility of the opposition as that of the ruling party/parties. The opposition in such a context plays following roles:

Supervision and scrutiny of the executive through Parliament

General debates on legislations, discussion of the general budget and motions of censure, are the avenues through which the opposition subjects the policies and actions of the government to constant criticism. Public Accounts Committee and chief related standing committees are traditionally presided by a senior opposition member. Opposition leaders are also members of the ad hoc committees that are constituted for scrutinizing specific cases like the 2G probe.

The Shadow Cabinet is a notional cabinet created by the leader of the opposition from among the opposition members of parliament (MPs). Each member of the shadow cabinet deals with a certain section of administration as is the case with the original cabinet. India borrowed its parliamentary structure from the Westminster System of UK; however, it did not adopt Shadow Cabinet system. Potentially, our parliament can benefit from the system through the empowerment as well as accountability brought in by the shadow cabinet system in the following ways:

The implementation of the shadow cabinet can be seen in its nascent form in states like Kerala, Goa and Maharashtra. The idea to succeed would require adjusting to Indian democracy where the parliament has multiple parties representing diverse regions.

What is the role that opposition plays in a democracy like India? In this context, discuss whether our Parliament can benefit from a shadow cabinet.