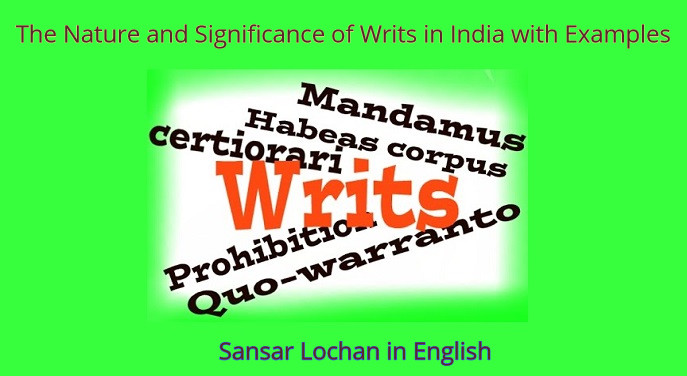 Article 32 and 226 of the Indian Constitution provide for Right to Constitutional Remedies, for the enforcement of fundamental rights, which has been regarded as ― “Heart and Soul” of Indian Constitution by Dr. B.R. Ambedkar. It is done by the higher judiciary through five kinds of writs.

The types and nature of writs are given below with adequate examples :-

Literally meaning to have the body, this writ is considered to be the “bulwark of individual liberty” against illegal and unjustifiable detention. It can be filed by any person on behalf of the other person and can be issued against both public authorities and private individuals..

In judicial terminology certiorari stands for demanding information with regard to a case from a lower court. For example, the Supreme Court exercised Certiorari in A.K Kraipak v. U.O.I, in which selection process was quashed on the ground of bias.

It is issued by the court prohibiting the authority from continuing the proceedings if such authority has no power or jurisdiction to decide the case. This extraordinary prerogative of the court is basically preventive in nature.

By mandamus is meant an order that is passed by a superior court and in which that court orders a lower court or a government agency or any public authority to do or refrain from doing any act which is otherwise in conformity with law.

It is an order, literally meaning “by what authority”, in which the court asks the ground (qualifications etc) on which a public servant has been appointed.

Significance of these writs

Writs are crucial in the defence of fundamental rights; without them, Part III would be meaningless, because they give teeth to the rights.

They are powerful checks against the excesses committed by the state as under article 12.

Using them, judiciary has interpreted many other rights as inseparable adjuncts to other fundamental rights. For example, right to dignified life in Maneka Gandhi Case 1978.

The importance of writs lies in creating permissible areas of exercise of power, authority and jurisdiction over administrative actions enforced by any State. It can be said that the judicial writs are constitutional remedies provided to the courts to keep the administration within the ambit of law.

Where there is a right, there is a remedy. In this context, discuss the nature and significance of writs in India with adequate examples.