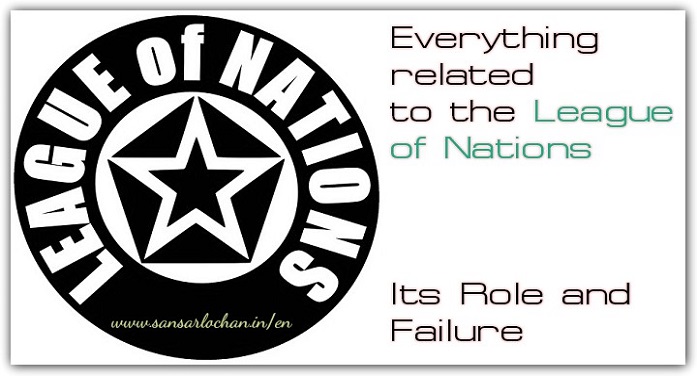 League of Nations was an international organisation which came into existence on January 10, 1920 as a part of Versailles Treaty. Its object was to promote international cooperation and achieve world peace. Its aims were embodied in the Covenant, which also contained fundamental clauses for the prevention and settlement of disputes. The member nations bound themselves not to resort to force until they had first submitted the particulars of dispute to the League and waited at least six months for its award or decision. The League of Nations was established to settle international disputes by peaceful methods and thus to prevent future wars. In this article we will discuss about the structure of the League of Nations, its role to maintain the peace and the reasons behind its failure.

The Assembly met annually in September and consisted of three representatives from each member state (who had, however, only one vote).

The Council, which meets at least 4 times a year, consisted of representatives from 5 permanent members including Great Britain, France, Russia, Italy and Japan (the last named three had withdrawn later) and 9 temporary members to be elected each year.

The Secretariat, under the Secretary-General, was the permanent Civil Service of League. Its headquarter were at Geneva.

The league had over 50 members including all the leading nations of the world except the U.S.A., Germany, Italy, Mexico, Brazil and Japan. Each of Dominions of the British Empire was a separate member. English and French were the official languages of the League. The expenditure was one million pounds per annum which was contributed by the members.

Besides dealing with matters concerning boundaries, health, finance, transit, etc., it controlled the mandated territories, governed the Sarr (till January 1935) and Danzig (till August, 1939). It also tried to mediate in the following disputes, with varying degree of success owing to the defects inherent in its constitution :-

Disputes that League of Nation Solved

The League of Nations was now more or less a dead horse. It failed to handle the Italo-Abyssinian problem and the question of Czechoslovakia and it could not provide protection to a member-state against an aggressor. With the international situation continuing to deteriorate the League machinery became impotently idle on the political side.

Why League of Nations Failed?