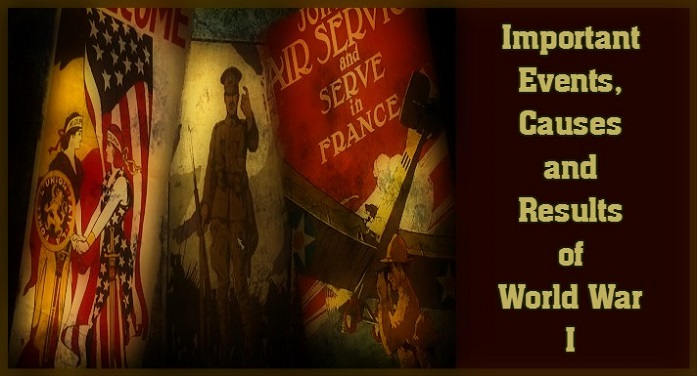 The first World War was waged mostly in Europe. It lasted from 28th July, 1914 to 11th November, 1918. It was originally called Great War. But it came to be known as first World War in reference to the Second World War which took place 20 years later. This war originated in Europe. In this war 70 million soldiers participated of which more than 9 million perished. The civilian causality was around 7 million.

The fundamental cause of the war was the system of hidden alliances contracted by the various powers of Europe. As it was later revealed, there was a secret pact between Russia, France, Serbia and Great Britain whereby they were bound to help each other in the case of a war with another country. Similarly Germany and Austria-Hungary had a secret alliance of this type. When the war broke out some other countries also joined in the conflict. Of these, Italy, Japan and the U.S. joined the former alliance, and Ottoman empire and Bulgaria joined the latter. Later on, these two alliances were called Allies and Central Powers respectively.

Another basic cause of the war was the fact that deprived of colonies outside Europe the Germans were sizzling with jealousy and anger against the countries that had captured colonies all over the world. Germany had become a great industrial country and wanted to have more markets for trade. Germany was envious of the colonial and naval greatness of England. William II, Kaiser of Germany, was very ambitious and wanted to gain influence in Turkey by linking Berlin with Baghdad by a railway line. This gave rise to great rivalry between England and Germany.

The immediate cause of the war was the murder of Archduke Ferdinand (the heir to the throne of the Austrian Empire) at Sarajevo by a Serbian. The Austrian held the Government of Serbia responsible for the murder and ultimately attacked Serbia.

Important Events of World War I

Click here to know>> The Important Battles of the World