Haider Ali and Tipu Sultan, the father and the son, differed from each other in character and personality. They differed from each other somewhat in matters of policies as well. But it is wrong to say that the extensive kingdom of Mysore created by Haider Ali was lost by Tipu because of his faulty character and policies. It was purely because of the imperial designs of the English. 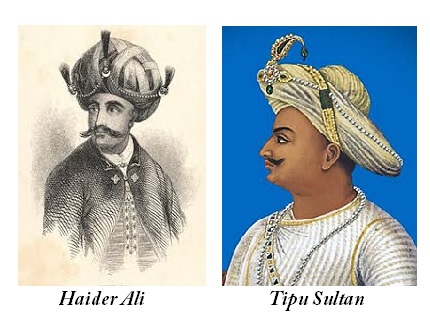 Haider Ali was born a soldier, a capable commander and a good diplomat. He was courageous and faced all dangers during the course of wars along with his soldiers. He was a very good cavalry commander. He realised the superiority of the European war-methods and military training and therefore, took the help of the French in training his army. He also learnt the use of European artillery for the same purpose. Haider Ali was not educated but he was intelligent and possessed a good memory. He could pay attention towards many affairs at one and the same time. He possessed liberal religious views. He honoured Hindu scholars and gave charity to Hindu temples. He was a good diplomat and succeeded several times in dividing his enemies. He was a capable administrator. Of course, being mostly busy in wars, he could not pay much personal attention towards administration and, therefore, gave extensive powers to his subordinates. But he was a good judge of human character and, therefore, selected capable officers, punished the guilty ones and rewarded the loyal ones. He thus, managed his administration well. His subjects were happy under his rule. Haider Ali rose to power under very difficult conditions. The Nizam of Hyderabad did not like the rise of a powerful state near his kingdom. The Marathas could never tolerate the rise of a new Muslim state in south India. The English became his enemies because Haider Ali depended on French alliance from the very beginning of his rise to power. Therefore, each of them attempted to destroy him and many times acted in collaboration with each other against him. Yet, he succeeded in keeping his hold over Mysore. Haider Ali fought two wars against the English. He succeeded against them in the first war while he died of cancer during the course of the second war. Therefore, it cannot be accepted that he failed against the English. However, it can be accepted that he could not build up a strong navy which alone could assure his success against the English. But, he had realised his weakness and, probably, that was one reason why he sought the support of the French. Therefore we regard Haider Ali as a fairly successful ruler. Sarkar and Datt write : “A completely self-made man, who found Mysore weak and divided but raised it to the position of one of the foremost powers of India in the latter half of the eighteenth century.”

Tipu was different from his father. However, there is no unanimity among historians about his character and personality. Both contemporary and modern historians have expressed contradictory opinions regarding the character and abilities of Tipu. The one view is that he was a cruel tyrant and a Muslim fanatic. He was a proud man who expressed his views concerning science, medicine, engineering, trade, military administration etc. while he had command over none. He got Khutbah read not in the name of the Mughal emperor who was the recognized de jure sovereign of India but in his own name. He was fond of changing the names of places and rules of administration without any need. He was not a good judge of human character and could seldom take correct decisions. Colonel Wilks wrote : “Haider was seldom wrong and Tipu was seldom right in his estimate of character.” He was a tyrant and got killed many innocent persons. He was a bigot. His Hindu subjects, therefore, were not happy under his rule. He lacked statesmanship. Instead of seeking support from Indian rulers, he sought the support of rulers of distant places like Turkey, Afghanistan, Persia and France. Therefore he failed.

But, this estimate of Tipu Sultan is not completely acceptable to the other set of historians. They have given a different estimate of the character and achievements of Tipu. Nobody denies that Tipu was well educated. He was well versed in foreign affairs. He sent ambassadors to different countries to seek their support because, probably, he realised the futility of courting friendship of the Nizam and the Marathas as they, in no case, could tolerate the establishment of a strong state in their neighbourhood. He was a courageous, a determined soldier, and a fearless commander. His power was seriously crippled in the third Mysore War, yet, he refused to accept his failure and attempted to regain the lost ground against the English. His determination to fight the English even single-handed was a unique example in the politics of south India.

There are many proofs which justify that Tipu Sultan was a capable and laborious ruler. Many writers have said that agriculture flourished during the period of his rule. The state enjoyed prosperity and peace during his reign. Sir John Shore wrote: “The peasantry of his dominions is protected, and their labours encouraged and rewarded.” Tipu Sultan took measures in bringing about improvement in currency, weights and measures and other spheres of administration. Of course, Tipu was a despot but he looked after the welfare of his subjects well. At times he gave severe punishments to individuals but only to those who were rebels and culprits.

The personal character of Tipu was free from any blemish. Of course, he was a devoted Muslim and observed his religion’s rituals with devotion. But, it is not clearly proved that he was a bigot. He converted the Hindus to Islam in some cases and turned out the Christians from certain places. But, it was not his accepted policy. These were stray cases. Tipu Sultan gave donations to Hindu temples and had appointed the Hindus in his service. However, it is accepted that as compared to Haider Ali, he was a bit intolerant towards the Hindus.

Tipu certainly committed a blunder as a commander. Instead of strengthening his cavalry, he emphasized improvement of his infantry and fortifications. Therefore, his policy became defensive which was one cause of his defeat at the hands of the English.

Thus, though Tipu was not as much successful as his father, Haider Ali, yet he was a fairly successful ruler. His failure against the English, however, does not allow him his rightful place in Indian history because in politics there is nothing as bad as failure.

Tags : PDF for UPSC exam short notes on Haider Ali and Tipu Sultan and their achievements. Death and biography.

“Haider Ali was born to create an empire and Tipu to lose it.” Discuss in view of the character and policies of Haider Ali and Tipu Sultan.

Compare Haider All and Tipu Sultan as individuals, politicians and commanders.