The primary cause of the fourth Mysore War was the imperialist policy of Lord Wellesley, though of course, Tipu Sultan too was preparing himself to settle his score with the English. Tipu did not forget his defeat and humiliation at the hands of the English in the third Anglo-Mysore War. He prepared himself to restore his lost power and prestige. He further fortified his capital, increased the number of his infantry and cavalry and improved their training, suppressed the rebellious chiefs and encouraged agriculture. In 1796, the titular Hindu Raja of Mysore died and Tipu refused to place his minor son ever nominally on the throne and declared himself the Sultan. He sought alliances with foreign powers against the English and sent ambassadors to Arabia, Turkey, Afghanistan and the French at the island of Mauritius. He became the member of the French Jacobin Club and called himself ‘Citizen Tipu’. Some French volunteers arrived in Srirangapatnam and planted the tree of liberty there. A small contingent of French soldiers also arrived at Mangalore at the same time when Lord Wellesley reached Calcutta. Thus, it was clear that Tipu desired to take revenge on the English.

Lord Wellesley, who came to India as governor-general of the Company in 1798 was equally anxious to finish Tipu forever. He regarded the activities of Tipu as those of an enemy. He was determined to eliminate the influence of the French from the courts of native rulers including that of Mysore. He was frankly an imperialist and was determined to extend the territory of the English in India by every means. Mysore could be an easy prey. Therefore he planned to finish the power of Tipu for once and all. He opened negotiations with the Nizam of Hyderabad and the Marathas. The Nizam centered into a treaty with the English in September, 1798. The Marathas did not reply clearly, yet, Wellesley assured the Peshwa that he would give him half of the territory captured from Tipu after the war. Thus assured of the neutrality of the Nizam and the Marathas, Wellesley declared war against Tipu in 1799. 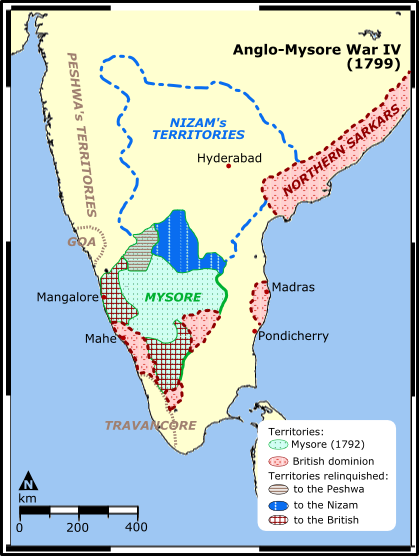 Mysore was attacked by the English from two sides in March 1799. Tipu was defeated in some engagements and, finally, was forced to take shelter within the walls of Srirangapatnam. The English besieged Srirangapatnam and captured it on May 4, 1799. Tipu died fighting and his son, Fateh Ali, surrendered himself to the English.

The fourth Anglo-Mysore war destroyed the state of Mysore which was strengthened and taken over by Haider Ali thirty three years back. The English offered some territory to the Peshwa on certain conditions which he refused to accept. The Nizam was given some territory near his own territory. The English occupied larger part of the territory of the state of Mysore. Rest of its territory was handed over to the minor son of the previous Hindu ruler who accepted the subsidiary alliance and, thus, became a dependent ally of the English. The members of the family of Tipu were imprisoned in the fort of Vellore.

Thus, the state of Mysore was finished by the English. It was a grand success of Wellesley and he was rewarded by the title of ‘Marquis’ by the English government.

Discuss the causes and the results of the fourth Anglo-Mysore War.