The kingdom established by Ranjit Singh met its doom within ten years after his death. The British occupied it after winning two successive wars, viz, the first and second Anglo-Sikh war. The primary cause of these wars was the policy of imperialism pursued by the English. They became interested in the conquest of Punjab after the death of Ranjit Singh because that was necessary for extending their empire to its natural frontiers towards the north-west. The immediate causes of the wars were provided by growing internal weakness of the Sikhs themselves. Here in this article, we will discuss about first Anglo-Sikh war. 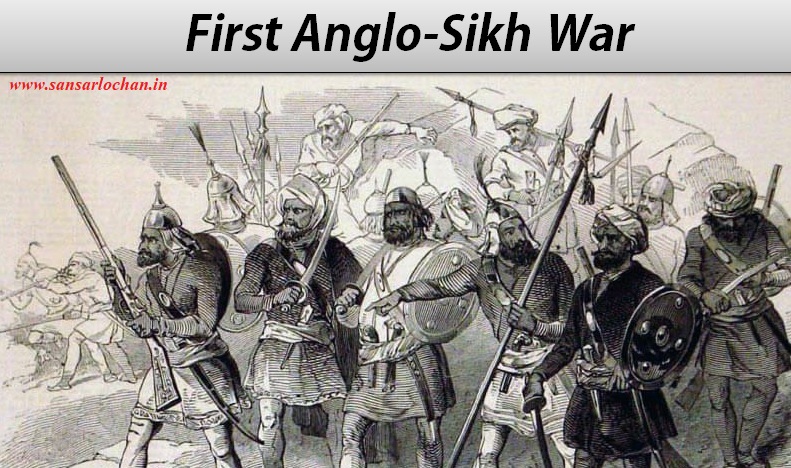 Ranjit Singh was succeeded by his imbecile son, Kharak Singh. He died carly on November 5, 1840. Nau Nehal Singh, his son, died on the same day when gateway in the fort of Lahore fell on him. It was believed by many people that his death was the result of a conspiracy and not an accident. His wife, Mai Chand Kaur, claimed the throne on behalf of his child who was yet to be born. She was supported by Sindhianwala chiefs. But she was opposed by Sher Singh, one of the sons of Ranjit Singh. Both the contending parties sought the support of the English. Ultimately, Sher Singh succeeded in capturing the throne with the help of the army. Sher Singh passed a licentious life for two years. He was, however, murdered along with his son Pratap Singh and vazir Dyan Singh in the later part of 1843 by Sindhianwala chiefs. Then Dalip Singh, a minor son of Maharani Jhindan was raised to the throne by Hira Singh with the help of the army. Rani Jhindan who became Queen regent was an able but unscrupulous woman. She could not pull on well with Hira Singh. Hira Singh was murdered in 1844. The de facto power of the state, then, passed in the hands of her brother and the vazir Jawahar Singh and her paramour, Lal Singh. But none of them was capable enough to look after the administration which resulted in mutual conflicts and murders of rival chiefs and break-down of the peace and order in the state. Under these circumstances, the army became most powerful in the state. The army constituted its own Panchayat which decided the affairs of the state. But, the Sikh army failed to do any good to the state. The Lahore Durbar became dissatisfied with the army. But it failed to control it. Many of the chiefs then desired to break the power of the army and, according to them, the only course left was to bring the Khalsa army in conflict with the English. It is believed that Rani Jhindan, and important nobles like Lal Singh, Tej Singh and Gulab Singh instigated the army against the English.

The English were no silent spectators of these affairs in Punjab. They prepared themselves to take advantage of the internal weakness of the Sikh state. They had nursed the ambition to conquer the Sikh state just after the death of Ranjit Singh. The letters written by Mrs. Henry Lawrence make it clear that the English were tempted to conquer Punjab in 1841. But, their misfortunes in the first Afghan War checked them to take any step against Punjab. Yet, they developed contacts with powerful nobles of Punjab like Gulab Singh, Lal Singh, Tej Singh etc. with a view to striking at Punjab at the first opportune time. Ellenborough who succeeded Auckland as the governor-general in February 1842 was anxious to conquer Punjab from the very beginning. His conquest of Sindh, treaty with the Sindhia, occupation of the Sikh state of Kaithal in 1843 and assembling the English army at Karnal and Firozpur were all motivated by the impending war against the Sikhs. He, however, could not get the chance and time to fight the war against them. Lord Hardinge who succeeded Ellenborough in July 1844, continued the policy of his predecessor and when the first Anglo-Sikh war started, there were forty thousand soldiers and ninety-four cannons on the border of Punjab. Thus, the English had prepared themselves well militarily much before the war. They moved diplomatically also. Major Broadfoot was deputed to Punjab as the Political Agent of the English. He did his best to divide the Sikh nobles and also to create those conditions which might induce the Sikhs to declare war against the English. There is no doubt that Broadfoot had instigated Tej Singh and Gulab Singh to cross the river Satlaj with the Sikh army which resulted in the war.

The British, thus, used every means to instigate the Sikhs to declare war. They finally succeeded in their attempts. The Khalsa army assembled on the banks of the river Satlaj under the command of Tej Singh. Yet, it declared that it would not cross the Satlaj if the English army would not proceed ahead of Ludhiana and Firozpur. The British availed of this opportunity and ordered their armies to move forward from Ambala and Meerut. The Sikh army, therefore, crossed Satlaj on December 13, 1845. The crossing of the river Satlaj by Sikh army gave the English the necessary pretext and Lord Hardinge declared war.

When we review the circumstances given above it becomes clear that the primary causes of the first Anglo-Sikh war were the selfish motives of the Sikh nobles on the one hand, and the long standing ambition of the English to conquer Punjab on the other. The crossing of the river Satlaj by the Sikh army was no genuine cause of the war as the army had not crossed the territory of the English. Even an Englishman, Robert N. Cust described it as “the first British invasion of the independent kingdom of the Punjab”.

First battle between the Sikhs and the English

The Sikhs fought every battle valiantly and in no battle was there an easy walkover for the English. But the Sikhs were finally defeated. The primary reason of their defeat was the treachery of their leaders and commanders. Most of them were in league with the English against their own army. At times, they even left their army during the course of battle and intrigued with the English for its complete defeat and destruction. The Sikhs lost the battle of Firozpur because of the treachery of Tej Singh and Lal Singh. In 1846, another noble Gulab Singh made a secret pact with the English. Lal Singh and Tej Singh fled before the battle of Sobraon and, while returning, destroyed the bridge over the river Satlaj so that the defeated Sikh army could be completely annihilated.

After the occupation of Lahore by the English, the treaty of Lahore was signed between the English and the Lahore Darbar on March 1, 1846. By this treaty, under the regency of Rani Jhindan, Dalip Singh was accepted as the Maharaja of Punjab. In return, he limited the strength of his army, surrendered most of his cannons to the English, accepted a subsidiary English force, agreed not to employ any European in his service without the consent of the English and paid a war-indemnity of rupees one and a half crores for which he had to sell Kashmir to one of his nobles, Gulab Singh.

This treaty, thus, left the Sikhs with no capacity for resisting the English. The British, however, continued to weaken the Sikhs still further. They forced the Maharaja to sign a fresh treaty in December, 1846. It practically made the English the masters of Punjab. By it, Rani Jhindan was deposed from her position as the Queen Regent. She was granted an annual pension of rupees one and a half lakhs. In her place, a Regency Council consisting of eight nobles, under the guidance of the English Resident, was nominated to look after the administration of Punjab. Thus, the fate of Punjab was, in fact, virtually sealed by the first Sikh War itself. It was only a matter of time before it actually passed into the hands of the English.

Tags : PDF for UPSC exam short notes on the First Anglo-Sikh war. When it occurred, causes and results of this war.

How was Punjab annexed to the British empire?

Describe the primary causes and results of the first Anglo-Sikh War.