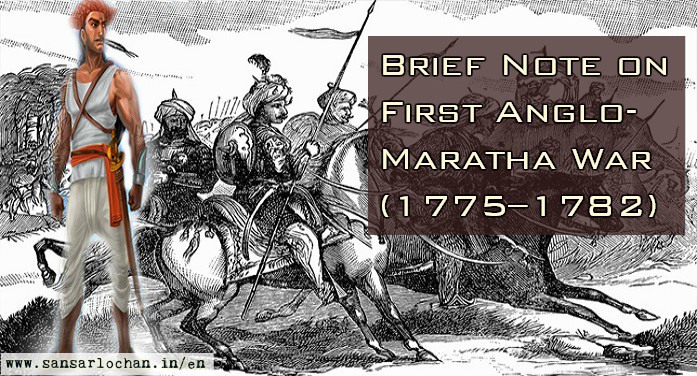 As we all know the British East India Company, which was originally a trade organisation, rapidly grew into an imperialistic institution. It fort several wars through the width and length of India. However, towards the end of the 18th century, it faced a great challenge from the Marathas who were very strong in the western and central flanks of the country. Hence it was but natural that the company could make an attempt to tackle the Maratha power. As the fate would have it, there were waged three big wars between the two forces. The first such military engagement is known in Indian history as the First Anglo-Maratha War (1775-1782).

Raghunath Rao had concluded the treaty of Surat with the English in 1775, agreeing to cede Salsette and Bassein in return for British help to secure for himself the post of Peshwa. Warren Hastings disapproved of his treaty, and sent Colonel Upton from Bengal to conclude the treaty of Purandar on March 1, 1776. Under this treaty, the English withdrew from the side of Raghunath Rao, but retained Salsette and Bassein. But the Court of Directors was still in favour of the old treaty of Surat. Hence the English decided to fight against the Marathas. For this purpose the army at Bombay was ordered to proceed for a fresh war.

The Bombay army advanced towards Poona, but was faced by a large Maratha force. A retreat before a Maratha army was considered difficult, and the enterprise ended with the convention of Waragon, by which British promised to restore their recent conquests. This action was condemned, the commanders were dismissed, and Hastings sent Goddard from Bengal to prosecute the war. Goddard took Ahmadabad, Captain Poham distinguished himself by taking the hill-fort of Gwalior, and the war was at last concluded by the treaty of Salbai in 1782. Madhu Rao II was recognised as Peshwa, Raghunath Rao retired on an allowance, and Salsette and some other islands were retained by the British.

Primary Cause of this war

The primary cause of the first Maratha war was the interference of English government at Bombay in the internal affairs of the Marathas. Peshwa Madhav Rao died in 1772. He was succeeded by his son, Naryan Rao. His uncle, Raghunath Rao got him murdered in August, 1773 and himself became the Peshawa. But many Maratha nobles disliked him and thought of him as a usurper. It was, afterwards, found that Raghunath Rao was certainly guilty of the murder of his nephew. This infuriated them and, in 1774, they declared the posthumous child of Narayan Rao, Madhav Rao Narayan, as the Peshawa.

Raghunath Rao fled away for his safety and found shelter with the British at Surat. There he signed the treaty of Surat with English government at Bombay on March 7, 1775. By this treaty, the British agreed to provide military assistance to Raghunath Rao and help in aking the Peshawa in return for their expenses. Besides, Raghunath Rao agreed to cede the islands of Salsette and Bassein to the British and promised that the Marathas would not attack the territories of Karnataka and Bengal. This treaty resulted in the beginning of the war against the Marathas.