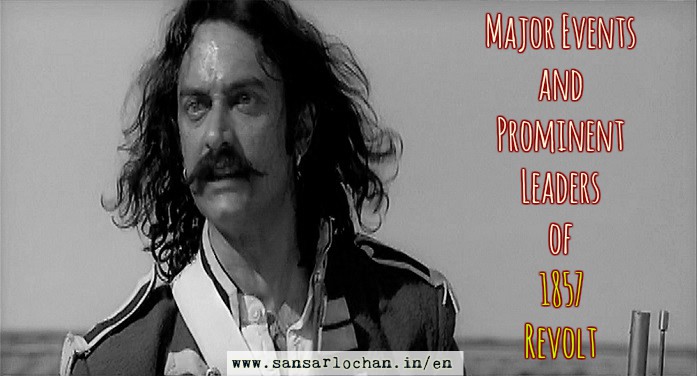 In the last post on the 1857 Revolt we had gone into the causes and circumstances leading to the outbreak of “First War of Indian Independence “. Now we will discuss below the major events and personalities connected with the 1857 Revolt. We will also throw light on the spots where the main conflict took place.

Like the 19th Native infantry and the 34th infantry, 85 soldiers of Meerut infantry also refused to use the cartridges. They were tried and they were sentenced to long term imprisonment. The sepoys rose in revolt by breaking open the gates of the jail and released all their fellow soldiers and rushed towards Delhi. Within 2 days they captured Delhi and proclaimed Bahadur Shah II (last Mughal Badshah) as the Emperor of India. They hoisted the flag of Independence on the Red Fort. Soon the mutiny spread to Lucknow, Allahabad, Kanpur, Bareily, Jagadishpur, Jhansi etc.

On 5th June, 1857 Nana Saheb revolted against the British and captured Kanpur and declared himself as the Peshwa. Soon the British attacked Nana Saheb at Kanpur with a huge army. He was joined by Tantia Tope, his loyal servant. But the British were successful in recapturing Kanpur. Nana Saheb fled to Nepal. Tantia Tope also fled. In Septemeber 1857, Delhi was recaptured by the British. Bahadurshah II was arrested and deported to Rangoon.

Rani Lakshmi Bai of Jhansi revolted against the British when they refused to recognize her adopted son. She was also threatened to be treated as an instigator and she was driven out of Jhansi. Lakshmi Bai who had been joined by Tantia Tope by this time captured Gwalior with his help. When the British came to capture Gwalior, a fierce battle took place and Lakshmi Bai died fighting valiantly in the battle field on 17th June, 1858.

Kunwar Singh, a zamindar  of Jagadishpur revolted against the British in Bihar. But he was cruelly suppressed. Thus, by July 1858, almost all the rebellions had been successfully put down by the British.