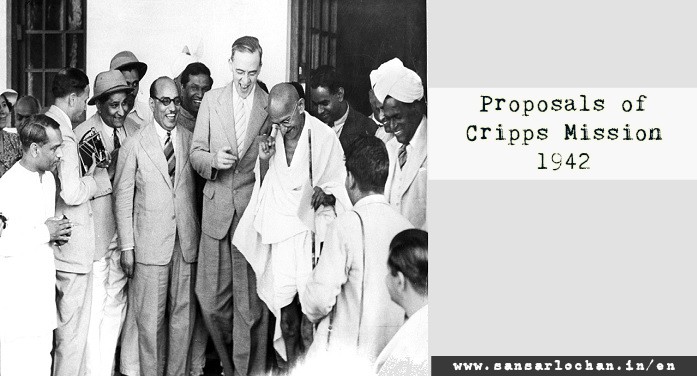 The Cripps Mission declared that entire India was to be a Dominion in internal as well as external affairs and after the war its constitution was to be framed by an elected body which was to be accepted by the British Government. But any province could choose to remain out of the Union of India and it could then frame its own constitution. By a treaty between India and Britain, rights of racial and religious minorities were to be protected. Treaty arrangements between the Crown and the Indian States would be reviewed in view of the altered constitutional set up. The Constituent Assembly was to consist of –

i) members elected by the Legislative Assemblies in provinces on the principle of proportional representation, having nearly 1/10th of the members of electors as its members;

ii) members from States nominated by Princes in proportion to the population strength of the States to British India as whole.

The proposals of the Cripps Mission formed an important constitutional effort inasmuch as it recognised the right of India to Dominion Status and self-determination and the principle of Sovereign Constituent Assembly.

The Cripps proposals were to be accepted in toto. As none of the political parties approved of all of them, they were withdrawn by British Government. Cripps plan was rejected by Congress because it did not grant responsible Cabinet Government at the Centre even without Defence during the war. The veto of ministerial decisions was to continue and the India Office was also to retain control of Indian affairs in London. At the same time the States representatives were to be nominated by the Princes and the Princes or States might choose to remain out of the Union of India. The Hindu Mahasabha rejected Cripps Plan as it struck against the integrity of India. Muslim League also rejected it because its claim to separate Union of Muslim majority provinces was not recognised.