Spain is a multi-community nation. Some regions of this country have maintained distinct entity on the basis of language, history etc. Catalonia is one of them. Recently this province grabbed political headlines for organizing a referendum for its independence from Spain.

Where is Catalonia located?

Catalonia is located on the northeastern parts of Spain, bordered by the Mediterranean and the Pyrenees. Barcelona is the provincial capital. Catalonia is about the size of Belgium and accounts for 6.3% of Spain’s territory and 16% of its population. Catalonia, like a few other parts of Spain, already enjoys a good measure of autonomy. It has its own Parliament and has powers over such subjects as education, welfare and heathcare. However Catalans are not satisfied. 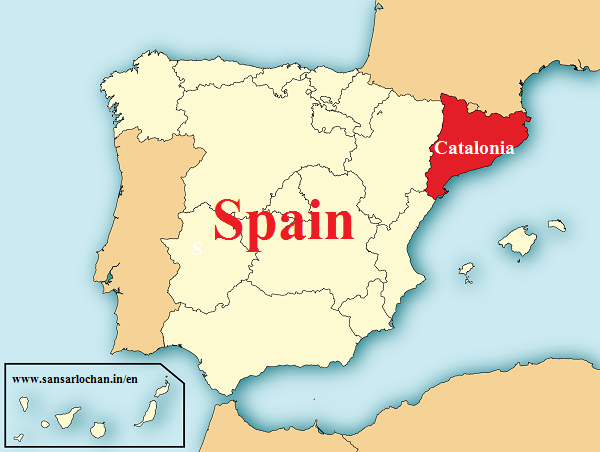 The Parliament of Catalonia had ordered for referendum on 6th September 2017. It was decided that a simple majority would suffice for decision either way and there would be no coram for it. Finally on 1st October, 2017 Catalonia voted for independence as a republic. Over 90% voted for independence. But the Spanish Government rejected the referendum and used force to disrupt voting. More than 800 people sustained injuries as riot police attacked peaceful protesters and civilians trying to vote. Volumes of ballot papers were seized by the police. Catalan president Carles Puigdement condemned police action and decided to appeal to the European Union against human rights violations.

Why Demand for freedom?