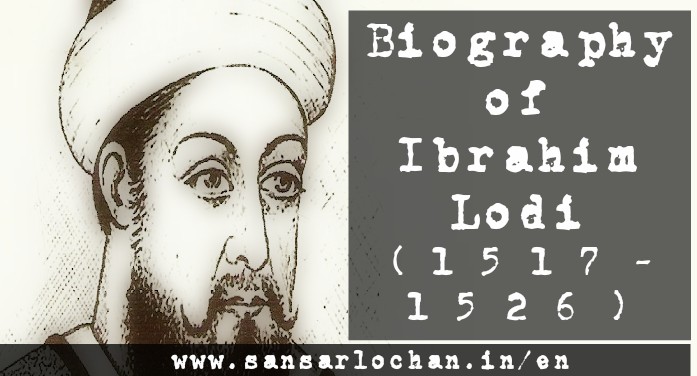 On the demise of Sikander Lodi, his eldest son Ibrahim Lodi inherited the kingdom of Delhi and Agra and his younger son Jalal Khan was made the ruler of the eastern and southern parts of the sultanate from Kalpi to Jaunpur. After sometime, some prominent nobles realized the folly of making Jalal Khan the ruler of a portion of the sultanate, which they believed stood to weaken the Afghan hegemony in northern India. They recognized Ibrahim Lodhi as the sole monarch of the entire Afghan kingdom. Jalal Khan was not successful in acquiring control of Jaunpur. He proclaimed himself as sultan with the title of Jalaluddin at Kalpi of which he had been the governor during the reign of his father. It led to a civil war between the two brothers in which Jalal Khan was defeated. He was slayed by the secret orders of Sultan Ibrahim.

Man Singh, the ruler of Gwalior, had once offered asylum to Jalal Khan. When Ibrahim Lodi came to know about this, he dispatched a royal army for the conquest of Gwalior. It laid siege to the fort which dragged on for many months. Man Singh died during the course of the struggle. His son and successor Vikramajit was forced to accept the suzerainty of Delhi. It was a great victory for Ibrahim Lodhi which made him overconfident of his military prowess.

Ibrahim Lodi committed a blunder of challenging Rana Sangram Singh alias Rana Sanga, king of Mewar. He sent a huge army for the conquest of Chittor. But this time the army of Lodi was routed and annihilated by the valiant Rajputs. Noted here this same Rana Sanga was later on to fight against Babar in decisive battle of Khanwa in which however he lost and thus paved the way for the rise of the Mughals. This gave a serious setback to the power and prestige of the young Sultan and signaled revolts in various parts of his kingdom. An inexperienced and incompetent ruler as he was, Ibrahim Lodi became nervous and did not know how to restore law and order. He adopted a dictatorial attitude towards the old and experienced Afghan officers. His ministers and provincial governors faced his irritable temper and arrogance. As a result, officers and old wise men did not cooperate with him wholeheartedly in the solution of administrative and political issues.

The revengeful and cruel treatment meted out by Ibrahim Lodi to the disaffected nobles, who fell into his hands, terrified the rest to carry on the struggle to the bitter end. Azam Humayun Sarwani, an old feudal lord of Sikandar Lodi, submitted and received royal favours. After sometime, he was imprisoned and liquidated by Ibrahim despite of the fact that he had apprised the Sultan of the rebellious designs of his own son Islam Khan, who died fighting the royal armies. Mian Bua, the aged minister of Sikander Lodi’s times, was dismissed for expressing his views which were disagreeable to Ibrahim. Later, he died in the royal jail.

Even though deprived of a major part of his sultanate, Ibrahim Lodi might have survived as the ruler of Delhi albeit the rebellious attitude of the Afghan nobles of the Punjab and the new political developments in the northwest region ruined him. Meanwhile Babar, a descendant  of Amir Timur and Chengiz Khan, had lost his foothold in his ancestral land of Central Asia but conquered Kabul in 1504 and established himself as the king of Afghanistan. Then he directed his attention towards the conquest of India in 1519-20. He led five military campaigns into the Punjab in quick succession. Caught between the two whirlwinds i.e. Ibrahim Lodi from Delhi and Babar from Kabul, the self-seeking Afghan nobles of the Punjab attempted to save their skins from each. It led to what is called the triple contest for political suzerainty in the Punjab. Babar acquired control of the Punjab (1524-25) by vanquishing the power of its Afghan nobles. He then killed Ibrahim Lodi at the historic First Battle of Panipat on April 21, 1526, and laid the foundation of the Mughal dynasty in India. With the fall of Ibrahim Lodi the sultanate of Delhi came to an end.