Mir Kasim proved himself a capable and industrious ruler and attempted to improve the administration from the very beginning of his rule. He attempted all that was necessary in the interest of the state. He also asserted his legal rights as the Nawab and refused to remain a puppet in the hands of the Company. The Company could not tolerate it and that resulted in its conflict with the Nawab. Many factors contributed to the conflict between the Company and the Nawab which, ultimately, resulted in the Battle of Buxar. 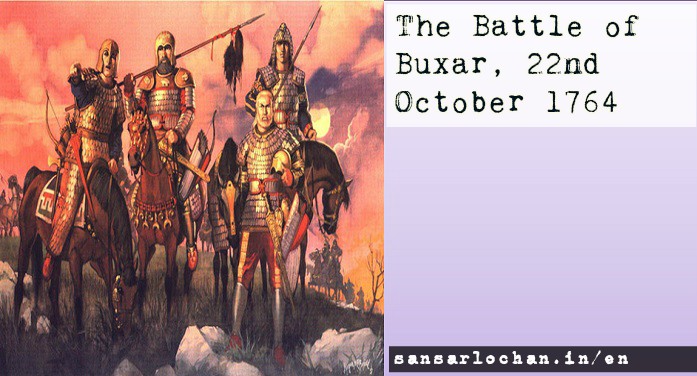 Causes of the Battle of Buxar

The conflict for sovereign power

The primary cause of the conflict between Mir Kasim and the English was the question as to who was the real power in the State – the Nawab or the Company? Mir Kasim was prepared to accept the rights of the Company as a trading corporation but he was not willing to share with it the power of the state while the English desired that the Nawab should rule as they desired. When he refused to share with them the power of the state, they decided to replace him.

The case of Shah Alam II

The Mughal emperor Alamgir II was murdered in 1760. At that time, his son and successor prince Shahzada was in Bihar. He immediately declared himself as the emperor and assumed the title of Shah Alam II. The English asked Mir Kasim to accept Shah Alam as the Mughal emperor. Mir Kasim refused the proposal of the English. He, however, agreed that he would accept Shah Alam as the emperor as soon as he left the territories of his kingdom. That displeased the English. Shah Alam, of course, left for Delhi and the problem was solved. Yet, the incident created misunderstanding between the Company and Mir Kasim.

The case of Ram Narain

Ram Narain was the Naib Diwan of the Nawab. Mir Kasim dismissed him from his post and he found shelter with the English. The Nawab asked the Company to hand him over to him. So far, the English had always refused to return the fugitives. But, at that time, Vansittart was the governor of the Company. He was a gentleman. He handed over Ram Narain to the Nawab. The incident was a minor one. But it was significant. The Nawab felt himself strengthened and mustered courage to oppose the English.

The question of trade

The main problem which brought the Nawab and the Company in open conflict with each other was the trading right of the Company and its misuse. The English traded without any payment of tax within the boundary of Bengal, Bihar and Orissa. The Nawab did not like this state of affairs, but he tolerated it. More so, he could not bear the misuse of this right by the officers of the Company. The English used to sell the dastaks (free passes) to Indian merchants who, thereby, were able to evade taxes on their goods as well. The Nawab, therefore, desired some sort of settlement with Company. But no settlement was reached between the two. The Nawab, in desperation, completely abolished the trade tax. It put the English and the Indian traders on par with each other. It affected adversely the trade interests of the Company. The Company enjoyed advantage only when it enjoyed the privilege of paying no tax while its Indian counterparts had to pay trade tax. It asked the Nawab to charge tax from Indian merchants. The Nawab refused to do so. It resulted in an open conflict between the Company and the Nawab.

Events of Battle of Buxar

Mir Kasim was defeated in a series of battles between June to September, 1763 and finally fled to Awadh where he sought military assistance from Shuja-ud-daulah, the Nawab of Awadh and Vazir of the Mughal emperor. At that time emperor Shah Alam was also in Awadh. Both of them agreed to help Mir Kasim. In 1764, Shuja-ud-daulah entered the territory of Bihar. He suffered a reverse against the English army near Patna and retreated to Buxar. The final battle at Buxar took place on October 23, 1764 where the English commander, Hector Munro, completely defeated him. Shuja-ud-daulah then sought the support of Malhar Rao Holkar but the joint forces of the two were defeated at Kara on May 3, 1765. That settled the fate of the Vazir who now surrendered himself to the English. The Mughal emperor, Shah Alam had already surrendered to the British at Banaras. Mir Kasim too had fled to Delhi prior to the battle of Buxar where he died in 1777 under extreme poverty.

Results of the Battle

The battle of Buxar had far-reaching consequences. It completed the work of the battle of Plassey. The English now became the undisputed masters of Bengal, Bihar and Orissa.

Besides, it left the seemingly powerful Nawab of Awadh at the mercy of the English. The prestige of the English also stood very high now. Of course, the Mughal emperor was emperor in name only and wielded no power, yet, he enjoyed prestige all over India. Now the British could use his name to increase their influence. The same way, the Nawab of Awadh was not a powerful ruler as is clear from his defeat at the hands of the English; yet, he was the master of an extensive and rich kingdom and enjoyed the rank of the Vazir of the Mughal emperor. His defeat was certainly creditable to the British and it also enabled the British to bring Awadh under their sway though gradually.

The battle of Buxar was important from military point of view. The battle of Plassey was won by the English more by their diplomatic skill than by the strength of their arms. But, the battle of Buxar was won by them by their sheer strength and skill in arms. The English with an army of only eight thousand defeated the army of the Nawab of Awadh and the Mughal emperor which consisted of nearly forty to sixty thousand soldiers. Thus, the battle was the result of superiority of the English in military and skill and arms.

In July, 1763 the English had placed Mir Jafar on the masnad. He died on February 5, 1765. The English then raised his minor son Najim-ud-daulah to the masnad of Bengal. The new Nawab surrendered the right of nominating his officials to the English and also dismissed his army. Thus, the English became the de facto rulers of Bengal.

Describe the circumstances which spoiled the relations between Siraj-ud-daulah and the English Company.

What were the causes, the events and the results of the battle of Buxar?