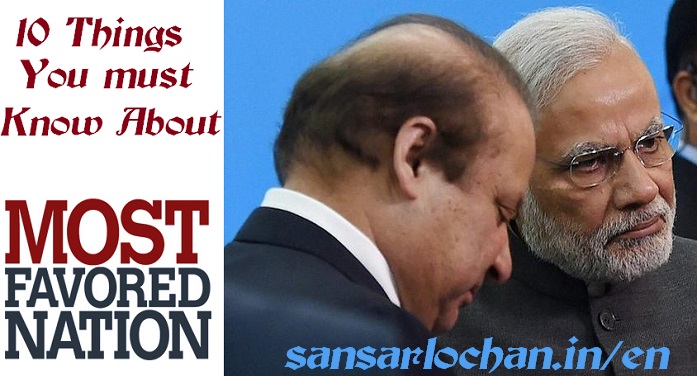 A day after the review of Sindhu Water Treaty , Govt of India is going to call a meeting to review the status of Most Favoured Nation granted to Pakistan on 29 September, 2016.  The officials of External Affairs, and Commerce ministries will attend this meeting. As we know, Govt of India is considering various measures to pressurize Pakistan on the terror issue, following the Uri attack on 18th September in which 18 Indian soldiers were killed by Pakistani infiltrators. It is worth noting that the most favoured nation status was given to Pakistan in 1996 unilaterally. Pakistan has not accorded this status to India so far, although in 2012 it had promised to do so. Let us know a few important facts and figures related to MFN status to Pakistan.

1. Most Favoured Nation (MFN) is a status of equality accorded by one state to another for international trade advantages, such as lower tariff or special quota.

3. Pakistan has not so far accorded MFN status to India although in 2012 it had promised to do so.

4. Govt of India is going to review on 29 September, 2016 the status of Most Favoured Nation granted to Pakistan in wake of the Uri attack on 18th September in which 18 Indian soldiers were killed by Pakistani infiltrators.

5. Withdrawal of MFN Status from Pakistan will hugely impact the economy of that country since Pakistan is dependent on India for such goods as cotton, chemicals, staple fiber, tea and salt etc. If India blocks the exports of these goods, Pakistani industries as well as people will suffer greatly.

6. In retaliation of withdrawal of MFN status by India, Pakistan may also block its exports to India. But the impact of such a move will be nominal because very few goods are imported from Pakistan.

7. India will emerge as a leading exporter of textile because if it blocks export of raw cotton to Pakistan, the manufactured textile goods in the latter country will become exorbitantly expensive.

8. The gross value of items exported by India to Pakistan is 2.17 billion dollars.

9. The gross value of items exported by Pakistan to India is 0.44 billion dollars.

10. The total bilateral trade volume between the two countries is worth 2.7 billion dollars.